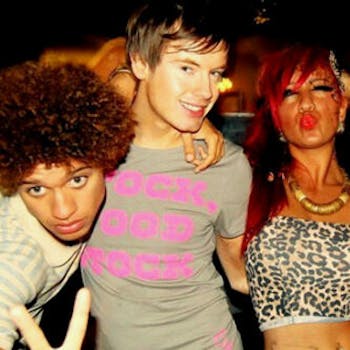 Jokes on Twitter are just not funny—to government officials, anyhow.

Leigh-Van Bryan, a 26-year-old Irish national, just wanted to have a few beers while soaking up America’s freedom-y goodness. But his trip to the United States came to a halt when one of his tweets caught the attention of the Department of Homeland Security:

“Free this week, for a quick gossip/prep before I go and destroy America.”

While real terrorists aren’t known to relay their plans via Twitter ahead of time, the Daily Mail reported that armed guards at Los Angeles International Airport took the threat seriously enough to apprehend Bryan and his travel-buddy, Emily Bunting, and bar them from entering the United States.

“They asked why we wanted to destroy America and we tried to explain it meant to get trashed and party,” said Bunting, according to the outlet.

The pair was also questioned about one of Bryan’s tweets which appeared to reveal a grand scheme to exhume the corpse of Marilyn Monroe. The Daily Mail reported that his tweet said:

Officials proceeded to search Bryan’s suitcase for spades and shovels, even though Bunting said the  tweet was little more than a reference to a “Family Guy” episode, although she did not get more specific. Also, spades and shovels wouldn’t be much use to would-be grave-robbers since Monroe is interred in an above-ground crypt at Westwood Village Memorial Park Cemetery.

“I almost burst out laughing when they asked me if I was going to be Leigh’s lookout while he dug up Marilyn Monroe,” said Bunting.

Despite explaining they meant no ill will either toward the United States or to its deceased starlets, the Daily Mail reports that Bryan and Bunting were held for another 12 hours in separate cells alongside suspected drug traffickers.

As Bryan tells it to the newspaper, “When we arrived at the prison I was shoved in a cell on my own but after an hour [or] two, huge Mexican men covered in tattoos came in and started asking me who I was. They told me they’d been arrested for taking cocaine over the border. When the food arrived on the tray they took it all and just left me with a carton of apple juice.”

To really drive home the ridiculousness of the situation, the Daily Mail also posted a photograph of Leigh’s charge sheet that reads: “Mr. Bryan confirmed that he had posted on his Tweeter [sic] website account that he was coming to the United States to dig up the grave of Marilyn Monroe. Also on his tweeter [sic] account Mr. Bryan posted that he was coming to destroy America.”