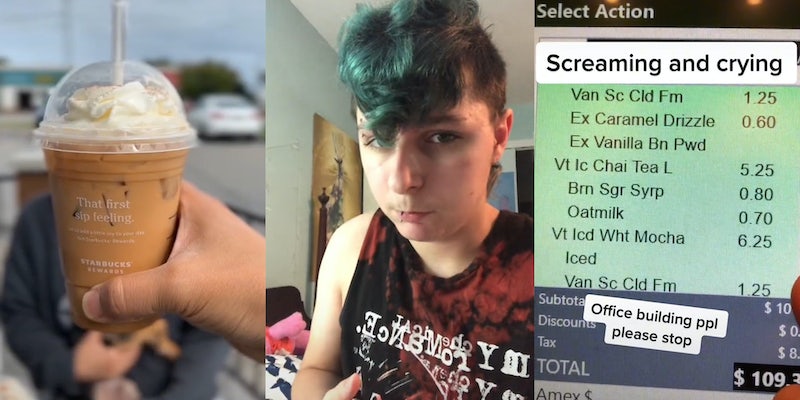 ‘Like just get a travelers bro’: Starbucks worker roasts customers who order before going into the office

'And then they don’t even tip.'

A viral video showing a large order of beverages placed at a Starbucks has sparked discussion about office coffee etiquette.

The video shows a Starbucks employee scrolling through a list of beverages ordered at his location by one customer. The 10-beverage order includes lattes, refreshers, and Frappuccinos. The order costs nearly $110, and several of the drinks are customized.

According to the caption written by poster Anthony Lombardi (@anthony._draws), the order was placed at a peak time in the day. The worker also joked the order made him “scream and cry” and urged “office building people” to “please stop.”

The time the order was placed appears to be 8:20am, which is 40 minutes from many workers’ starting time.

@anthony._draws During peak too ofc #starbs #starbies #starbucks #starbucksdrinks #starbucksbarista #pain #suffering #fyp ♬ Jiggling Up That Corn Hill – There I Ruined It

The video was viewed nearly 30,000 times. Many partook in mocking such commenters, urging them to make their coffee in travelers to take into the office and arguing that these are the types of customers who don’t even tip.

“Also a lot of office buildings have a coffee machine just buy a bag f starbs beans dang,” Lombardi said in one comment.

It is common knowledge among people who spend time online that Starbucks workers are constantly busy. A common complaint among Starbucks baristas working to unionize their stores is that they are overworked and understaffed. Starbucks workers have also repeatedly taken aim at the time and effort that goes into making Frappuccinos.

This seems to be why many seemed to resonate with Lombardi’s clip.

“And they always come in with a caddy. how often do yall do this that yall have a caddy for this?” one questioned.

“Someone came in yesterday with a 60 drink order and said ‘I’ll be back in an hour,'” another recalled.

Another revealed how they deal with such orders. “I make their drinks basic af idc if it says extra anything,” they wrote. “Those fucking office people are annoying and hospital staff too!!!”

The Daily Dot reached out to @anthony._draws via Instagram direct message.