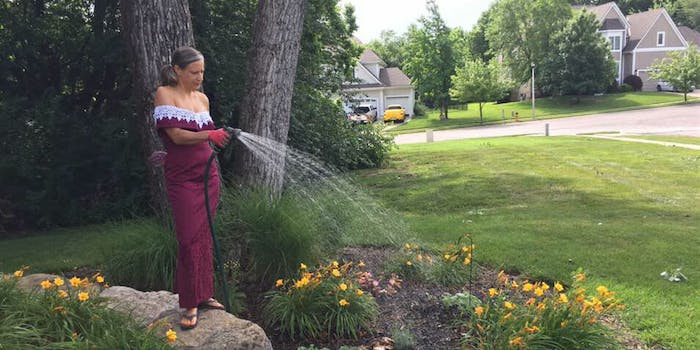 Woman goes about her day in ’90s bridesmaid dress—and it’s, uh, something

Some dresses are better left in the closet.

Because of cost and sentimentality, bridesmaid dresses are hard to get rid of. You hold on to them hoping, maybe, just maybe, to get a second use out of them.

Then there are the Victorian living-room-drapes-like dresses that are better to leave in the dark corner of your closet.

After children’s book author Tammi Sauer posted her 1995 wedding photos on Facebook to celebrate her anniversary, she quickly realized just how outdated her bridesmaids’ dresses look. Sown from a store-bought pattern by moms, grandmothers, and seamstresses for the occasion, the gowns look “like a Thanksgiving tablecloth,” as Sauer put it herself, according to BuzzFeed News.

Sauer hoped that her bridesmaids would wear them again. Suffice to say, they haven’t. But Sauer’s college friend Heidi Mann decided to take her up on the suggestion, wearing the 22-year old dress while tending to her daily chores and activities. And boy, does Mann show just how absurd the dress is for any occasion.

In case you missed the collage that was buried in the comments of my anniversary post….I had apologized to my…

“The way Tammi was so apologetic made me think about how almost every person whose wedding I’d been in hoped I’d be able to wear their dress again,” Mann told BuzzFeed. “I don’t blame them… I did the same thing to my bridesmaids. I was certain I was getting them dresses that they would be able to wear again. I wasn’t.”

Mann might not be able to wear the dress ever again unless in jest, but the internet loves her photoshoot nonetheless.

Hahahaha this is so good

I may have to do this. Warning to every bride who … you know who you are. I was also occasionally the "random seamstress" mentioned.

Sauer even teased that they could hit up Ellen, in their original 1995 look.

If you'd like us to stop by, @TheEllenShow, Heidi and I already have our outfits picked out. https://t.co/skBq4Cvy3m

The most amazing part of the story, though, is that Sauer has been married to her husband, who was also her prom date, for 22 years, and her friendships with her bridesmaids are still going strong. For many, Sauer and Mann’s back-and-forth isn’t just funny—it’s touching, too.

“Everything about this story is amazing: that Tammi stayed married to her prom date, that she is in touch with her bridesmaids after all these years, and that her bridesmaid still fits into a dress from 1995!” one person commented on the BuzzFeed article. “Good for them.”