Florida mom Ashley Kaidel is going viral for her Facebook post about dealing with a breastfeeding shamer at an undisclosed restaurant.

Kaidel recently posted a photo of herself breastfeeding her child and looking at the other side of the room in a crowded restaurant. In the text portion of her post, Kaidel explained that she was staring at a woman who was looking at her with disgust and shaking her head in apparent disapproval of Kaidel’s choice to breastfeed her baby in such a public place.

“She is looking at me with disgust and shaking her head with [judgment] in an attempt to shame me and indirectly tell me without words that I am wrong and need to cover myself. [T]he reason I post these types pictures is for the mother that tried breastfeeding uncovered once and she got shamed, she got stared and pointed at, she got nasty comments, she got asked to leave the room, she got asked to cover up.”

Kaidel went on to say that breastfeeding mothers are protected under federal law to breastfeed wherever they need to. She also noted the hypocrisy of people who shame breastfeeding yet treat breasts as if they only exist to arouse men. That’s not the case. YouTube user Kristina Kuzmic recently made a hilarious video highlighting the same hypocritical logic of this stance.

Kaidel broke down out society’s hypocrisy over breasts:

“[B]reasts were made to sustain your baby’s life before they were made to bring pleasure to any other man, woman, partner or spouse. Their sole purpose is to make food and dispense it straight into a baby’s mouth. There is nothing weird about this and there’s no difference in me feeding my baby with my breast than you feeding yourself with a spoon.”

Kaidel continued that it’s selfish to think a mother ought to cover up her baby at a restaurant or in another public place just for the sake of others. Kaidel argued that babies shouldn’t be excluded from the experience merely because someone else is uncomfortable with the way they consume nutrients.

“[I]t is exponentially unfair and selfish to ask a mother and baby to exclude themselves from a table or event or gathering because you’re for some reason uncomfortable with how she feeds her child,” she wrote. “No person should be isolated and shunned because they’re eating, especially when you yourself are eating while ridiculing how someone else is eating. Is it not certainly easier to avert your eyes from a displeasing sight rather than suggest or demand a mother and child remove themselves from your presence? How pompous and selfish is this? Just look away. It’s simple to do so. No harm done at all.”

This popular meme below furthers Kaidel’s argument that some people don’t have a problem with breasts in sexual situations but that they cringe at the sight of mothers nursing infants. 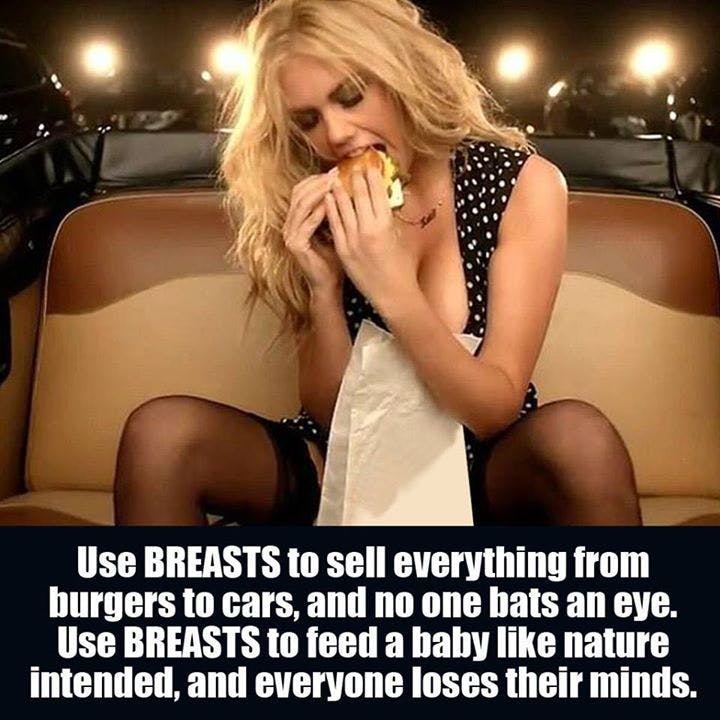 Since Kaidel spoke out, she’s received tons of praise online and she was even inspired her to start a “Intactalactivist Mama” Facebook page, which has more than 8,000 likes already.

Kaidel is far from the first woman to note the ridiculousness of shaming breastfeeding mothers. Actress Alyssa Milano recently faced backlash on social media when she posted an old photograph showing her breastfeeding her baby:

Happy Birthday, my beautiful Elizabella. You've taught me that my heart has no end. You were the missing piece to my soul. Thank you for choosing me.

Milano said later on that it’s crazy to her that singers like Miley Cyrus receive less criticism for showing their breasts in an a sexual way while she gets criticism for breastfeeding—a big part of motherhood.

“I don’t care,” Milano told Entertainment Tonight. “Everyone’s fine with [Miley Cyrus’] nipples being out. I think people are more comfortable sexualizing breasts than relating them to what they were made for, which is feeding another human.”