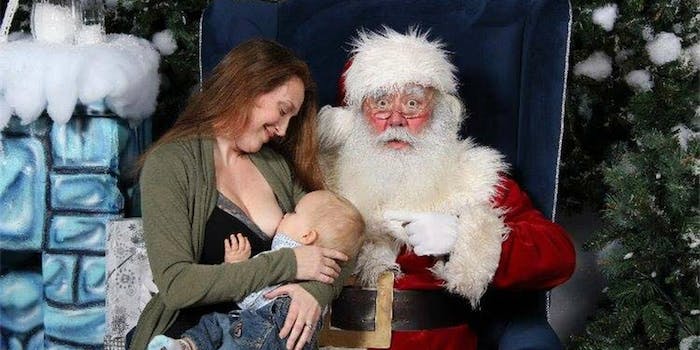 'Breastfeeding... shouldn't deserve a comment one way or the other.'

Sometimes, Santa Claus helps ease the pain of a grieving parent. And sometimes, Santa is ready to help a breastfeeding mother who wants to make a statement.

Rebecca Dunbar, a mother of twins from Ontario, Canada, encountered the latter recently when, as she waited in line at a local mall to get her one-year-old twins’ picture with Santa, one of her children got hungry. Said Dunbar to Global News:  “My one little guy has the patience of nothing.”

Fearing he would begin to scream, Dunbar began nursing him, and since she already was so close to the front of the line, she thought that, since she nurses wherever and whenever she needs to do so, it’d be funny to have herself photographed with Santa while feeding her child.

She asked the photographer and the Santa if they were comfortable with the idea. Both were, and this is  how it was documented on Dunbar’s Facebook page. 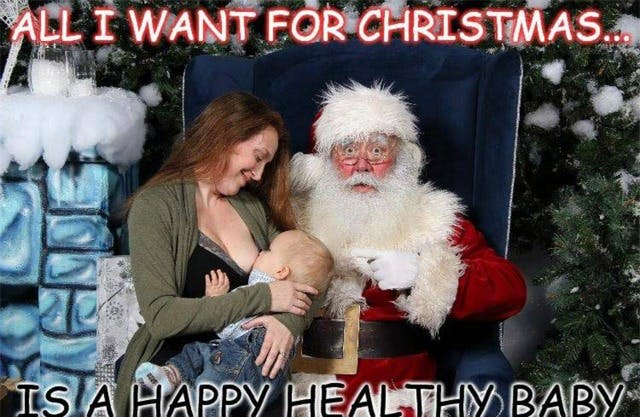 The problem was that people who saw the photo—the vast majority of people, in Dunbar’s estimation—were offended by the image. Dunbar said about 75 percent of people had a negative reaction.

Someecards documented a few comments in which Facebook users said things like, “OMG …. she’s sick!!!” and “That’s Santa for gods sake” and “This is disgusting” and “This is so tasteless!!”

But gosh people, even Santa was cool with the arrangement.

“Santa said, ‘It’s been 40 years and [I’ve] never had a question like that, but why not,'” Dunbar told CityNews.

But while the idea of taking the picture partially was a joke, Dunbar and the viral photo certainly have raised the awareness of how people think about breastfeeding in public.

“I’m very pro-breastfeeding,” she said. “Breastfeeding should be more acceptable in all ways. It shouldn’t deserve a comment one way or the other.”