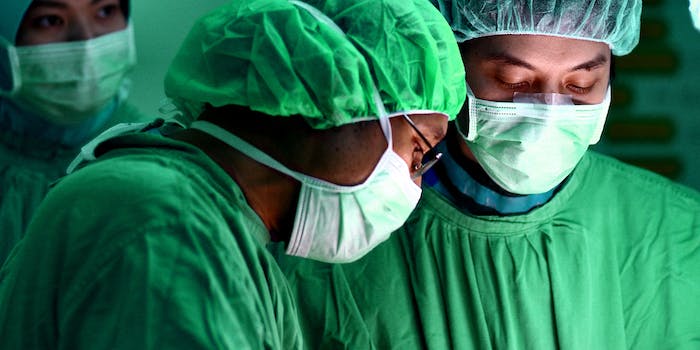 Why this person is crowdfunding a breast reduction surgery

Lola Phoenix says the surgery is a medically necessary procedure.

“This is a necessary medical procedure. This is not cosmetic. …I don’t want this, I need this.”

This is how Lola Phoenix describes the breast reduction surgery being crowdfunded on YouCaring after the U.K.’s National Health Service rejected a request for the operation. Lola, whose preferred pronouns are “they” and “them,” spoke to the Daily Dot about why raising the £6,400 (approximately $9,400) required for the procedure is so important to them.

Lola is a 28-year-old American who has lived in the U.K. for five years. They identify as agender, meaning they do not feel as if they are male or female, or any other form of gender. Simply put, Lola wrote in an email to the Daily Dot, “In the same way asexual people don’t experience sexual attraction, I don’t experience having a gender.”

Lola’s agender identity is key to why they want surgery, but the medical establishment does not agree. Lola was born with a condition called Septo-Optic Dysplasia (SOD), a malformation of the brain which can affect the optic nerve and the pituitary gland, which regulates hormones. In Lola’s case, SOD has left them blind in one eye and also prevents their body from producing certain hormones, including the sex hormones estrogen and testosterone.

SOD caused Lola to experience growth problems and appear androgynous as a child, which made life extremely difficult. “I was bullied to hell and back for not looking enough like one gender or the other,” they told the Daily Dot. Therefore, when Lola was offered hormones at the age of 12 to trigger adolescence and increase their presentation as female, Lola jumped at the chance. “I would have never admitted to being agender, even if I knew it as a concept, because I was so bullied because I was different that I just wanted to take hormones so I’d be left alone.”

But presenting as a female did not help Lola. “I then just got bullied for supposedly being a lesbian,” they explained, illustrating how people who don’t identify as either male or female can still be victimized even when they try to conform to one gender.

Taking estrogen had another terrible side effect: Lola developed G cup breasts at age 17, which caused them psychological discomfort ever since. Lola uses a binder to reduce the size of their chest, and said in an interview with BuzzFeed that this is what made them realize they wanted breast reduction surgery. “After putting [a binder] on, I felt psychologically 100 percent better, like this is what it should be like,” Lola explained. “But it’s uncomfortable and in the summer I sweat. It cuts horribly into my side.”

There is one major exception, however: The NHS has thus far been unhelpful with their request for breast reduction surgery. In Britain, all essential and life-saving operations are free under the NHS; some elective operations can also be provided for free by the NHS, but only if certain conditions are met. Although, like many people with large breasts, Lola also suffers with back pain, their chest is not considered large enough to qualify for an NHS reduction.

Lola therefore tried going through the NHS’s Gender Identity Clinic (GIC), on the basis that their breasts feel out of line with their agender identity. The GIC rejected Lola “because they thought my name was too feminine and therefore, I hadn’t ‘consolidated’ my ‘gender role.’ I wore jeans and a t-shirt and [yet] I was told I ‘presented as female.'” Lola also was dismayed to be referred to as “she” throughout the letter from the GIC and to be characterized as “having a “female-sounding voice.”

Lola believes that they have been discriminated against because they do not identify with either side of the gender binary. For Lola, not wanting to be stuck with obvious physical markers of femininity does not mean they necessarily identify any more with masculinity; they do not want a full mastectomy or surgery to masculinize their chest, as some might assume. Lola says they have begun their crowdfunding campaign because after five years of back and forth with the NHS, they simply cannot wait any longer to feel comfortable in their own body.

The West London Gender Identity clinic spokesperson made a statement to BuzzFeed in response to Lola’s complaints:

“Non-binary gender identity is absolutely not a reason why anybody is discharged from the clinic and our clinicians do refer people for surgery. Occasionally, the treatments that patients request are not anatomically or pharmacologically possible and when this occurs this is discussed with them.”

“One of the reasons I’ve had such little faith in the GIC is because I’ve yet to hear a positive story from a non-binary person who’s been in one… Any health system which requires a trans person to demonstrate the validity of their identity is inherently bad… In the end, it’s all down to fitting into 1950s-era gender roles.”

This is an experience that trans author Julia Serano echoes in her book, Whipping Girl: A Transexual Woman on Sexism and the Scapegoating of Femininity. “[GICs] are notorious for enforcing particularly strict oppositional and traditional sexist norms for their trans patients,” Serano wrote, giving the example of trans women only being approved for treatment at GICs “after showing up to their appointments wearing dresses and makeup.” In other words, those who conform to the gender binary have better luck navigating the system.

Lola is aware that some may consider their request for surgery an inappropriate use of public funds. They wrote to the Daily Dot:

“I understand that the NHS doesn’t have a large pot of money to hand out to everyone. That’s not what I expect nor is it what I’m asking for. But if I had been [refused] because they needed to use the available funds to treat, for example, trans women who are in danger of violence without treatment, that would not have been damaging to me.”

Their feeling instead is that being refused treatment on grounds like clothing or voice appears to have less to do with saving money and more to do with the medical establishment appointing itself as the gatekeeper of trans and non-binary people’s gender identities. Therefore, Lola has complained to the Patient Advice and Liaison Service, but says they are not optimistic about the outcome or how long it will take to get a response.

Lola’s YouCaring crowdfunding campaign is currently about halfway financed.  “The only thing I really need is my surgery,” they said. “This is about being comfortable and whole in my body.”

Photo via Phalinn Ooi/Flickr (CC BY 2.0) | Remix by Jason Reed