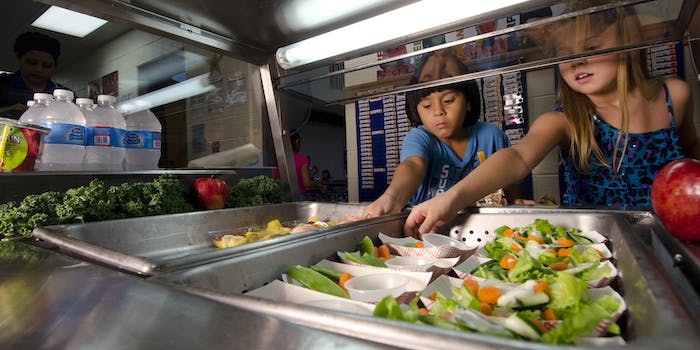 He won't stop until every elementary student in his county has access to a hot meal.

Eight-year-old Cayden Taipalus can easily pinpoint the moment he realized there was injustice in his school cafeteria.

He was getting his lunch when he saw another student get denied a hot lunch because he didn’t have any money in his lunch account. Instead, the boy was offered a cheese sandwich.

“This upset the child along with my son,” wrote Cayden’s mom Amber Melke-Peters. “He came home and wanted to know how he could help kids out.”

Together they organized a campaign to raise money to help the kids at his school pay for lunch. They called it “Pay It Forward: No Kid Goes Hungry.” Using donations from relatives and neighbors, as well as collecting money from recyclables, Cayden was able to pay the delinquent lunch fees of the students at his school and added money to their accounts.

But he didn’t stop there.

Cayden and his mom next made their way to the crowdfunding site fundrazr.com, where they set up a page to help other schools. As the story spread, donations piled up. Currently, Cayden has raised about $28,000 of his $30,000 goal and has paid for thousands of lunches.

“Great work, Cayden! The world needs more kids like you!” donor “Barbara” commented on the page.

“You are raising a very special kid. At eight, he already realizes the cure for greed is generosity: the cure for apathy is compassion. At eight, he observed something wrong and took the steps to make it right and has rallied support to feed the hungry. He is a little hero, seriously!” Natalie Dance, another donor, said.

Cayden wants to make sure every elementary student in his county has access to a warm meal.

Image via US Department of Agriculture/Flickr