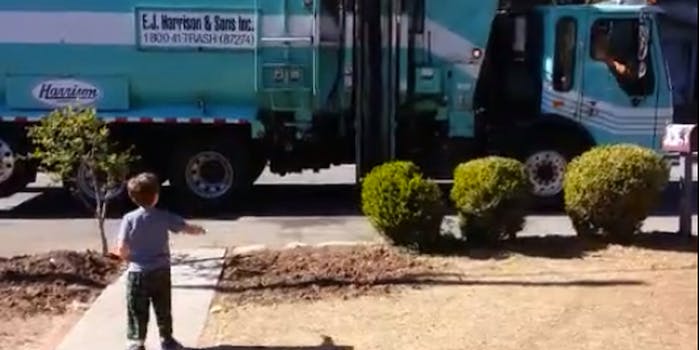 Boy with autism gets best gift ever from local garbageman

Usually the trash guy hauls things away. This time he came with a special delivery.

Five-year-old Daniel used to be afraid of the noisy garbage truck. Now he can’t get enough.

The little boy, who has autism, has become fixated on the regular comings and goings of the haulers on his street, according to his mother, Robin Newberger.

“Like many children on the autism spectrum, this has become a ritual for him,” she wrote in a post on Facebook earlier this week. “He loves the predictable movement of the hoist and is excited by the entire spectacle. He waits all week for Monday morning pickup. He knows exactly which cans are being picked up each week, and Sundays are special for him when he takes the cans out with his dad.

“Our recycle man, known only to us as Manuel, is his favorite. He always has a big smile for Daniel, who is faithfully waiting for him every Monday. To him, trash pickup is like a symphony. He synchronizes his hand movements with the truck. We have so many ‘Trash Day’ videos, but this one is like no other.”

That’s because Manuel Sanchez, of E.J. Harrison & Sons hauling, didn’t just come to haul things away on a that sunny California day. He brought with him a special a gift for Daniel.

So many people have been warmed by the garbageman’s gesture, the Newbergers started a Facebook page to contain all the well-wishes for Daniel and for Manuel.