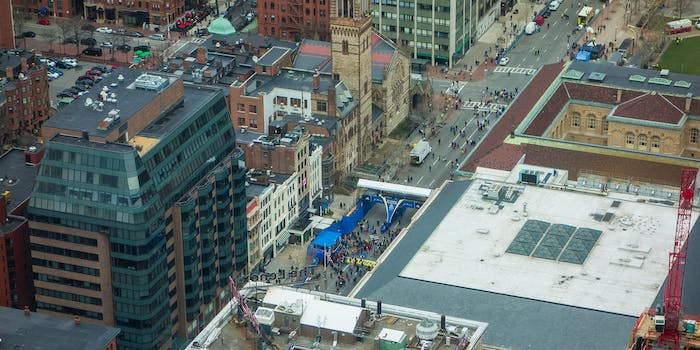 The trial is underway, and Rebekah DiMartino had some words for the accused.

Rebekah DiMartino was one of the 260 people injured in the Boston Marathon bombing in 2013. Now Dzhokar Tsarnaev is on trial for the injuries and three deaths caused by the bombing, and DiMartino has offered him something surprising—her thanks.

On Wednesday, after she appeared in court, DiMartino posted an open letter to Tsarnaev on Facebook introducing herself and explaining the impact Tsarnaev had on her life.

My name is Rebekah Gregory. We don’t really know each other and never will. But over the last two years, I have seen your face not only in pictures, but in almost every one of my nightmares. Moments before the first blast, your stupid backpack even brushed up against my arm, but I doubt you remember because I am no one to you. A complete stranger. And although I was merely just a blip on your radar, (someone that happened to be standing 3 feet from your designated “good spot” for a bomb), you have been so much more to me.

DiMartino has undergone 16 reconstructive surgeries after her leg was ripped apart by shrapnel and debris. There was a chance she’d never be able to walk again, but she was miraculously able to walk into the courtroom and testify against Tsarnaev.

…this afternoon, I got to walk into a courtroom and take my place at the witness stand, just a few feet away from where you were sitting. (I was WALKING. Did you get that?) And today I explained all the horrific details, of how you changed my life, to the people that literally hold YOURS in their hands. That’s a little scary right? And this afternoon before going in, I’m not going to lie..my palms were sweaty. And sitting up there talking to the prosecution did make me cry. But today, do you know what else happened? TODAY…I looked at you right in the face….and realized I wasn’t afraid anymore. And today I realized that sitting across from you was somehow the crazy kind of step forward that I needed all along.

She closed by, shockingly, crediting him with saving her life.

So yes…you did take a part of me. Congratulations you now have a leg up…literally. But in so many ways, you saved my life. Because now, I am so much more appreciative of every new day I am given. And now, I get to hug my son even tighter than before, blessed that he is THRIVING, despite everything that has happened.