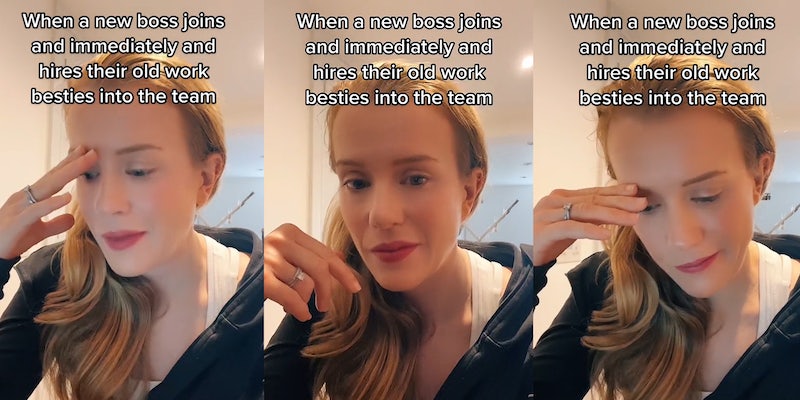 'Just wait till they hire family members to come in and work.'

A career coach’s viral TikTok about how a new boss hires work besties has sparked debate on the app, with people divided over whether hiring friends and former colleagues is a good or bad thing for the workplace.

The six-second clip, which has amassed 1.4 million views, is part of a trend related to Taylor Swift’s song “Exile”—specifically the lyric: “I think I’ve seen this film before, and I didn’t like the ending.”

TikTok user Louisa, who posts under the handle @careerbend, lip-syncs the lyric accompanied by on-screen text that reads: “When a new boss joins and immediately hires their old work besties into the team.”

Looking strained in the video, Louisa makes her position on the scenario clear, as she added in the TikTok description, “alarm bells ringing!”

In the comments section, several people agreed that bosses hiring old work friends in a new workplace can be a red flag, with one user recalling how when it happened at their own workplace, it “simply made the office toxic” and resulted in everyone leaving. Another claimed that they were “fully convinced” this is how “toxic work environments” start, while a further commenter added that “nepotism and/or cronyism” is the “first stage in the downfall of a business.”

However, despite the concerns of the TikToker and several commenters, others insisted that hiring former colleagues in a new business isn’t always necessarily a bad thing.

“There’s nothing wrong with strong teams moving together, but they need to be deserving & qualified,” one commenter noted. “It can be a sign of a great manager in some cases!” Another added, “Before judging, see if the ‘bestie’ is indeed a great professional that fits your boss’ new project like a glove.”

People who had been both in the “boss” and “bestie” position in the past also spoke out, with one employer admitting, “It’s taken me years to find and develop talent. And hiring is really challenging. Why wouldn’t I pull people I already knew were strong?” Another commenter then added, “As one of the work besties who just followed her old boss to a new job I swear we are not all bad!”