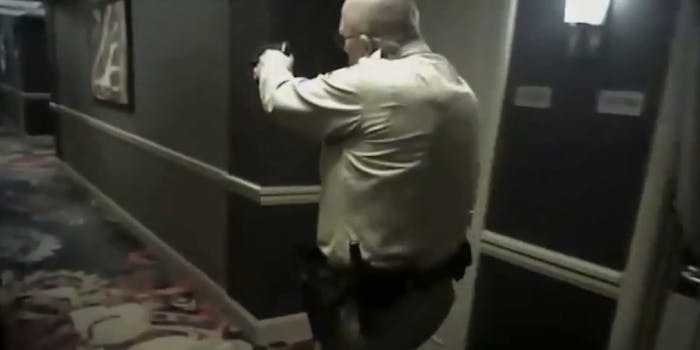 Officers waited a floor below the shooter for nearly half the length of the mass shooting.

On Wednesday the Las Vegas Police Department released body camera footage from October’s Las Vegas shooting, which shows police officers who were inside the same hotel as the shooter, Stephen Paddock, waiting a floor below him for nearly five minutes while he rapid fired at the crowd below.

The officers, identified by the Las Vegas Review-Journal as Cordell Hendrex and Elif Varsin (who was on her first day as a trainee) were on their way to respond to the reported active shooter on the 32nd floor of the Mandalay Bay Resort and Casino. They took the elevator to the 31st floor and were on their way to the stairwell when they heard rapid gunfire and took cover. In the video, one of the officers can be heard realizing the severity of the situation, saying, “Holy shit, that’s rapid fire.” On the radio, someone says, “Be advised, it is fully automatic fire from an elevated position—take cover.”

The officers continued to initially advance toward the stairwell until one says “back the fuck up,” and the group takes cover in the hallway. The rapid fire can still be heard on the bodycam footage throughout. After the group takes cover, a Mandalay Bay security staff member can be heard on the radio giving the location of the shooter, saying, “We know where it’s at, the 32nd floor, room 135.” The group continued to stay in cover for another minute and a half, for a total of four and a half minutes waiting on the floor below the shooter, during the 10-minute massacre.

When an officer broadcasts over the radio, “We need to stop the shooter before we have more victims. Does anyone have eyes on the shooter?” At this point, Hendrex begins moving toward the stairwell again. The officers ultimately reached the stairwell door for the 32nd floor at 10:16pm, two minutes after the shooting stopped, but found it had been barricaded. The massacre left 58 dead, and hundreds injured, including other police officers who were responding on the ground level.