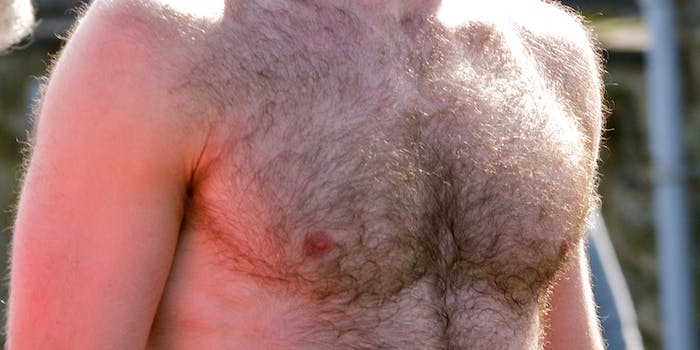 Body hair is not a matter of trends

It shouldn't matter if chest hair is in or out.

According to the New York Times, chest hair is in. For men, that is.

“For a new generation, the overly groomed body appears to be falling out of favor,” wrote Max Berlinger. It seems men are foregoing the smooth, freshly waxed look of Channing Tatum in Magic Mike XXL and are now “allowed” to go for the rugged, au naturale look of Joe Manganiello in True Blood.

I'm a stay at home dad with chest hair. I was brought into existence by rubbing two 2 NYT trendpieces together.

The NYTimes says "Welcome Back, Chest Hair." I just looked down. Nothing yet, but I live in hope.https://t.co/Gl7tMGCoiA

Ultimately, this is a good thing. Anything that encourages people to accept what their body naturally does is excellent for self-esteem and diversifying cultural norms. But also, this is not quite that.

Accepting what your chest looks like is not the trend; hairy chests on men is. It’s creating another beauty ideal for men, while setting up a double standard against everyone else.

I counted 13 hairs on my nipples yesterday. They are long, and thick, and extremely dark, because that’s the kind of hair my body produces. Once, I dated a guy who naturally had no chest hair. According to this new “trend,” neither of us are desirable.

As a half-Italian and half-Egyptian woman who's had a mustache since the age of 8, I'm personally glad that chest hair is back for me too.

Sometimes I pluck the hairs, and other times I forget or just don’t care. I also shave my legs and armpits, wax my pubic hair, had electrolysis done to my upper lip to not much success, and get my eyebrows threaded. I do it because I like the way it feels bare, because my thick hair can get very itchy and annoying, and probably because I’ve internalized a lot of beauty standards over the past 29 years.

Recently and forever, women have been fighting back against the expectation that we should all be smooth, hairless dolls. In a piece for the Cut, writer Eve Peyser defends growing out her “happy trail,” speaking of the freedom she felt embracing her natural hair growth but saying “not all women who sport stomach hair have reached a similar point of enlightenment.” BuzzFeed also ran a story interviewing six women about growing out their leg and armpit hair. “I can have hairy armpits or legs and also do things to the best of my ability and be the best version of myself,” said Sara, who stopped shaving about a year ago.

While it’s understood that women do have leg and armpit hair, a woman’s “happy trail” may still be a controversial place to have growth. And in many minds, something like chest hair doesn’t even enter the realm of cultural possibility for women. Neither does hair on our hands and knuckles, toes, or sideburns.

Lydia started developing chest hair when she was 14. “I go through life not really worrying about wearing high-cut shirts to hide it, but I also feel extremely ashamed of it, and then ashamed of feeling ashamed,” she told the Daily Dot. “It’s so bizarre that I can be completely at peace with my leg hair, and completely celebrate my fabulous head of hair, but I have so much shame about my chest and facial hair.”

The way in which body hair is treated for women is linked deeply to ideas of gender and race. Beauty standards for women skew cis and white, whereas things like facial and chest hair are signifiers of masculinity. Therefore women with visible body hair are considered more masculine, less feminine, and less beautiful. “I think a lot of the hatred of body hair is rooted in transphobia and in racism, and until we build a society where women of color and trans women can have bodies that are celebrated, not for their approximation of white cis-ness but for their fullness and truth, I probably can’t come to terms with my feelings about myself,” Lydia said.

KP, a biracial woman, spoke to the conflict of knowing that female beauty standards are a lot of work and pretty arbitrary, but still buying into some of them anyway. “Body hair is definitely optional for men,” she told the Daily Dot. “I mean, it’s technically optional for women, but I don’t like the way [most body hair] looks on me.”

And while hair-removal is optional, not removing body hair brings its own set of problems says Mouse, a “white nonbinary femme” waiting to start Hormone Replacement Therapy. “I have sensitive skin, I have trouble shaving my chest, I’m living right now as the girl with the hairy tits,” she wrote to the Daily Dot. “When people get assigned gender wrongly, we are asked to make our bodies digestible. And hair, even the lovely hair on my wrists that I’m fond of, my bushy eyebrows, my chest, all that undermines me in the eyes of the world.”

Body hair can even be frustrating for those who don’t identify within the gender binary. Coreo is genderqueer and says they experience frustration with their thick, dark leg hair. “It’s such powerful hair. So manly, to me. Not ‘queer woman/person who doesn’t shave’ hair to me,” they told the Daily Dot. “But shaving feels more feminine than I want, too. So that’s the bind!”

Our fashion and beauty ideals are built to signal male or female (or a very slim idea of androgyny), and they ignore the realities of women with body hair, men without it, and everyone in between. “I think, in general, I just wish there were more ways to signal androgyny while fat,” said Coreo. “And that I could love my leg fur more.”

Though men have always had a lot more freedom when it comes to body hair, that doesn’t mean there aren’t stigmas. Just last year, Men’s Fitness published a poll in which they found 78 percent of women liked a man’s chest hair, but with the caveats that it be trimmed, that he not shave his arms or legs, but that he does shave his back. Trend or not, there are limits.

I asked my husband, a man with a lot of body hair, about the chest hair trend. “I’ve never been particularly sensitive about being kind of hairy,” he said, “but the idea of a thing about bodies being ‘in’ doesn’t make a ton of sense to me.” However, neither does a trend that accepts some forms of body hair and not others. “Am I supposed to have a line of hair running across my shoulders, or what?”

Of course, this pro-chest-hair declaration was made by a New York Times trend piece, so take it for what it is. But the biggest problem with talking about body hair, both for men and women, is positioning any of these body hair choices as inherently empowering, enlightening, or desirable. That’s not to say people aren’t allowed to have personal preferences, but there is no one way of displaying body hair that is objectively better.

Yes, let’s embrace chest hair. But if we do, we should be embracing all the other follicles sprouting around it.