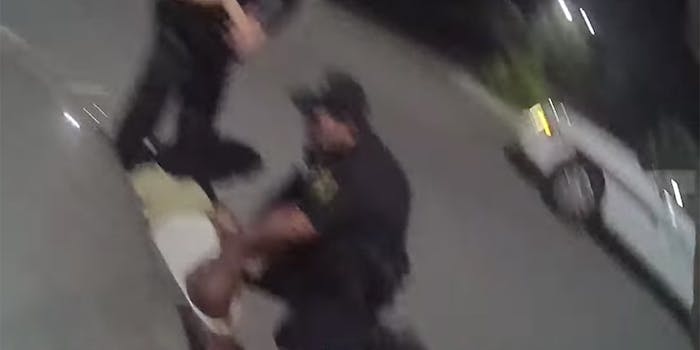 'Don't look at me with your spitty bloody face.'

The new footage shows the entire altercation, with officer Christopher Hickman beating Rush and then complaining “I have blood all over me.” Hickman, who resigned from the police department, faces felony and misdemeanor assault charges, plus a federal civil rights investigation, following the incident.

Rush can be heard saying “I can’t breathe” while in the chokehold, echoing the Black Lives Matter rallying cry and words of Eric Garner, who was killed by New York police in 2014.

Police stopped Rush, who had just gotten off work at Cracker Barrel, for jaywalking. Hickman tased and then beat Rush for attempting to run, and then led him to the patrol car.

“Don’t look at me with your spitty bloody face,” Hickman says to Rush.

Later, as he’s recounting the arrest to another officer, Hickman says, “I beat the shit out of his head. Not gonna lie about that.”

The City of Asheville condemned the actions of police officers in the video and said Hickman “used dangerous and excessive force” in arresting Rush.

“What happened in these recordings is unacceptable and does not meet the standards of the Asheville Police Department, the values of the City of Asheville, or the expectations of Asheville residents,” the city said in a statement.