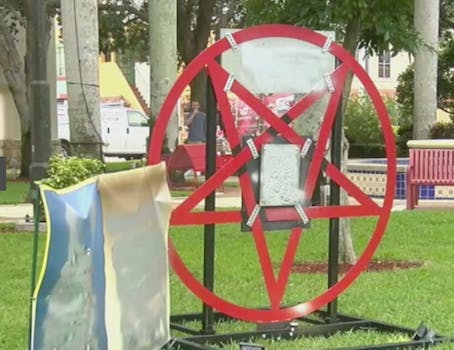 Even though it was erected in a 'free speech zone.'

The First Amendment states that Congress shall not prohibit the free exercise of religion. That means all religions, which one man in Boca Raton, Florida, decided to demonstrate by setting up a Satanic display in Sanborn Square. And for weeks it’s been causing controversy by locals who don’t think it’s fitting next to displays from other religions.

Sanborn Square is a designated by the city as a “free speech zone,” and every year there are displays of Christian and Jewish iconography to welcome some of the holidays. But middle school teacher Preston Smith and another person put up a Satanic display, complete with a “Keep Saturn in Saturnalia” sign, to draw attention to what freedom of religion really looks like, and to make a statement about the separation of religion and government.

“‘May the Children Hail Satan’ is an artistic expression of defiance toward the Sanborn Square nativity scene, which performs an annual reenactment of predatory indoctrination in a public park targeting young children before they have critical thinking skills,” Smith wrote in a statement. “Satan and God are clearly both fictional characters devoid of any verifiable peer-reviewed scientific evidence.”

Smith has also said he and his students do not speak about his beliefs in school.

If you’re going to call an area a free speech zone, it stands to reason that any speech—provided it’s not directly hateful or violent—can be displayed there. And while you may not agree with Smith in his personal views, they do not target any person or belief. However, local parents are calling for Smith to lose his job, the display has been vandalized, and a local church marched on the park to protest its inclusion. In a video of the demonstration, Pastor Mark Boykin said the gathering was about “claiming your city for Jesus Christ.”

The Daily Dot has reached out to Smith and the Boca Church about the activities, but Lucien Graves of the Satanic Temple, an organization that “facilitates the communication and mobilization of politically aware Satanists, secularists, and advocates for individual liberty,” emailed the president of the Boca Raton Middle School Parent Teacher Association about the hypocrisy of wanting to ban a religious display. “I think your actions are deplorable and they send forth the wrong message to the children in your district,” he writes. “That non-Christian religious voices aren’t welcome.”

While America is majority Christian, it is unconstitutional to declare an official religion, and America is, ideally, a place where people of all faiths, or no faith, can practice freely. Nearly 23 percent of Americans don’t identify as any religion, according to a Pew study. So if they have to spend every holiday season (since nearly every religion has a holiday around December) surrounded by nativity scenes, Christmas carols, and other overt displays of Christianity, it’s only fair that everyone else gets a chance to display their beliefs too.