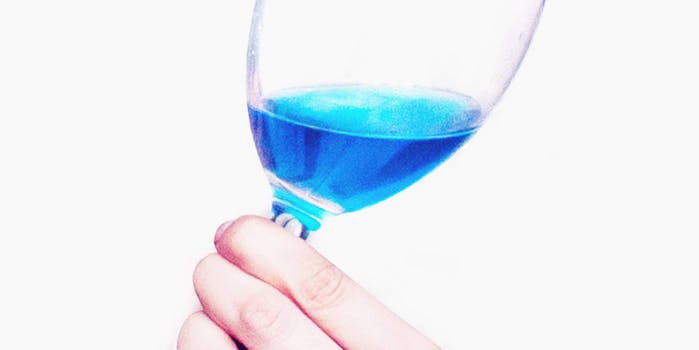 Everyone is talking about the wine we're sure no one has actually sampled.

No writer is immune to the PR pitch. Sometimes it’s a slow news day, and it’s easy enough to regurgitate a press release, add a few jokes, and, voila, page views!

So kudos to the food media world yesterday (and us today) for giving Gik’s Blue Wine some heavy exposure. May Google Analytics be ever in your favor.

Blue wine is just what it sounds like: Hypnotiq for oenophiles. It’s apparently all the rage in Spain, where it was created, and gets its blue color from a mixture of a pigment found in grape skin and some other plant. News organizations are quick to list the ABV, cost of a bottle, and philosophy behind the company. But nothing more about the taste, other than it’s a “sweet, chilled wine”—and it’s bright blue. Thanks, guys!

Blue #Wine Is Real, Sadly Not Made By Romulans https://t.co/TOrXvQDknQ pic.twitter.com/1nVBPGAfwD

Blue wine may be coming to the U.S. https://t.co/KIfLeR5eZe pic.twitter.com/OnwhE8xQRk

A cursory search over social media show most of the “raging” is coming from news outlets, though there are a few intrepid tipplers giving the blue wine a shot themselves.

We’re not sure if the blue wine is good or not, but who cares when it can help you, according to Gik’s wesbite, “unlearn the hundreds of protected wine designations of origin, the complex and demanding service standards, and everything that sommelier said at a tasting course to which you were invited”? It’s like you’re not even willing to sacrifice your tastebuds to undo the hegemony of the Spanish wine tradition. What kind of foodie are you?