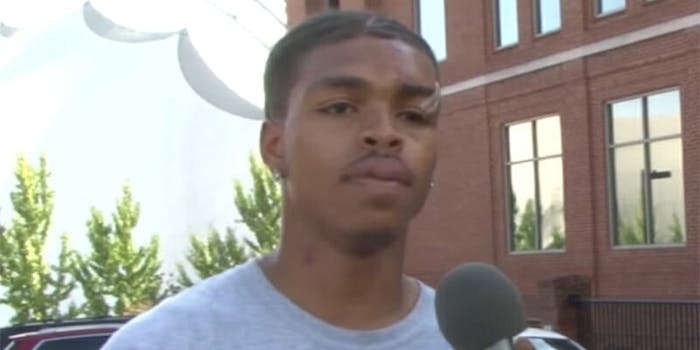 DeAndre Harris was slapped with an assault charge after he was brutally beaten.

A black man who was brutally beaten at the “Unite the Right” rally last year in Charlottesville was found not guilty on Friday of assaulting a white nationalist at the same event.

The man, 20-year-old DeAndre Harris, was attacked in a parking garage on the day of the rally and then later slapped with a misdemeanor charge of assault and battery against Harold Crews, a North Carolina attorney, the Washington Post reported.

A YouTube video that circulated after the rally shows Harris and Crews pulling opposite ends of a flagpole as Harris swings a flashlight that appears to hit Crews on the head or shoulder. Moments later, white nationalists, including one dressed in military gear and holding a plastic shield, beat Harris to the point that he had a spinal injury and needed 10 stitches to his head.

The brutality of the beating shown in the video augmented the fury that came out of the Charlottesville rally on Aug. 12, 2017, which also resulted in the death of 32-year-old Heather Heyer, a counterprotester who was mowed down by white supremacist James Alex Fields Jr.

According to the Post, the judge in the trial found Harris not guilty of assault because he said Harris did not intend to hit Crews and only swung the flashlight in defense of his friend.

Read the full report over at the Washington Post.