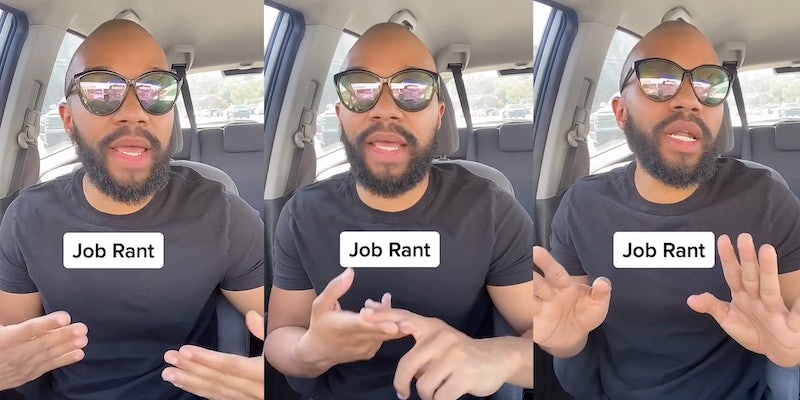 ‘All because of some f*cking pants?’: Man says ‘Karen’ at new job didn’t let him do his training because he was wearing jeans

'How do jeans impact your ability to work?'

A man says that he was told he couldn’t participate in the orientation for his new job because he was wearing “black jeans” instead of “black pants,” sparking debate about work dress codes in the comments of the now-viral TikTok.

In the video posted by TikToker Justin Murray (@jstnmurray_) on Sept. 27, he says that a training coordinator, Christine, came to his new job orientation to “pick up everyone’s driver’s licenses and social security cards.” She allegedly confronted him for wearing black jeans, saying that he “couldn’t start the class” without khakis or black pants.

“Mind you, the fucking email that I got did not specify that it could not be black jeans. All it said was black pants,” Murray says in the clip. “‘Cause I don’t own a fucking pair of khakis because I’ve been working from home all these years.”

Murray continues that the other trainer, Anthony, offered him a pair of khakis to borrow from his car. When they returned, Murray says that Christine said he would have to do another training course on a different day.

“This is orientation day. We know ain’t shit really going on other than us absorbing stuff and getting packets and reading through employee handbook shit,” he says. “Like, are you deadass not going to let me do this training class? Because I’m going to have to wait however long it is to start another training class.”

At the end of the clip, Murray calls out companies who “boo-hoo” about not having enough people to work.

“My gut told me not to go in, but I didn’t know why. And I was fighting against it,” Murray adds. “But I should have listened to my gut and stayed the fuck home. Fuck that job and fuck that wack-ass Karen that did that stupid shit.”

The video has reached over 5,000 views as of Tuesday, with commenters discussing whether strict dress codes are necessary for corporate work environments.

“100% agree. How do jeans impact your ability to work?. It doesn’t.. People want to work but we are tired of this ridiculous bullshit,” one user wrote.

“Yeah they should have said slacks if that’s what they mean black pants are ANY black pants,” another said.

However, some users feel that jeans were too “casual” for the first day.

“Always go with business casual for the first day. No Jean material until you confirm it’s acceptable. Sucks and shouldn’t matter but it does to them,” another suggested.

Others believe that the strict and “confusing” dress code could signal a larger red flag about the company’s culture.

“So, they are ineffective communicators, can’t admit to a fault, and incapable of REASONABLE flexibility. Run,” a viewer wrote.

“Red flag… You may have dodged a toxic environment,” another wrote.

“Listen to your gut and this is a sign. Glad you’re prioritizing yourself. When they ask why, please bluntly tell them,” a third added.

In the comments section, Murray shared that he did not return to that job as he would not accept that type of behavior from companies.

“I emailed them and told them to keep the job,” he wrote in a comment. “That’s a huge red flag for me.”

The Daily Dot reached out to Murray via Instagram direct message.