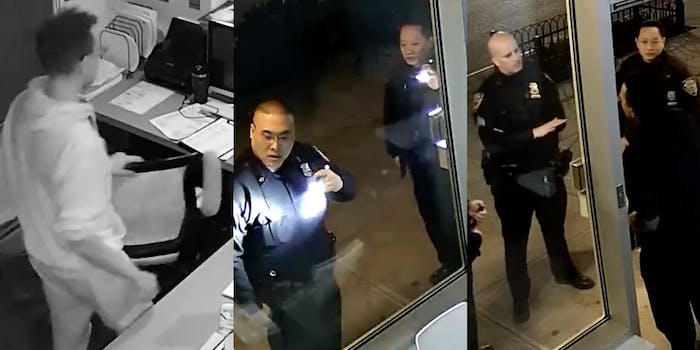 'The idea that this could happen to a man going to his office because of his skin color is outrageous.'

A video posted by the New York Post shows a Black dentist allegedly being profiled by New York City police, accusing him of breaking into his own Manhattan practice.

According to documents filed with the city comptroller, a Black Manhattan dentist states that cops racially profiled him as they accused him of breaking into his own office in March, per the $5 million notice of claim against the city and supplied surveillance video.

According to the Post report, Dr. Benjamin Shirley, 41, had come back into his Upper West Side office after throwing out the trash around midnight on March 9. The video shows multiple cops shining lights inside, demanding Shirley identify himself.

Shirley spoke through the intercom, but the cops threatened to break into the office despite telling them he was the owner. Per documents, two cops “attempted to unlawfully gain entry to the building by force and repeatedly called [Shirley] threatening to destroy his property and enter with force if he did not come outside despite the fact that at all times, they lacked any probable cause or reasonable belief that [Shirley] had committed any crime.”

Shirley can be seen calling what the documents say was 911, out of fear for his life.

The video show Shirley actively avoiding the police at his door. “Despite the fact that [Shirley’s] state-issued identification lists the address of the location of incident, [Shirley] was forced to provide his identification to [the police officers] multiple times before they would agree to leave,” the claim papers state.

“It’s midnight, he’s Black, they are shining flashlights inside—that’s how you set up all kinds of bad things happening,” Rezvani said. “To casually walk out, it’s not possible in that scenario. What happened to him is common and it shouldn’t be. The idea that this could happen to a man going to his office because of his skin color is outrageous.”