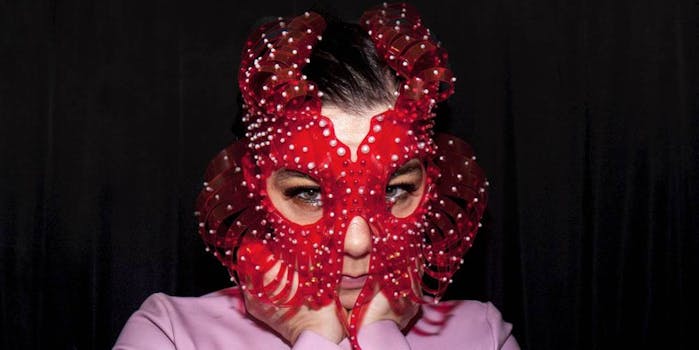 The artist says she was criticized for 'hiding' during her DJ set while similar sets were unremarked upon.

Icelandic musician, actress, and producer Björk has taken to Facebook to discuss criticisms about her DJ set on Friday at Houston’s Day For Night Festival, which she says would never be directed at male DJs.

“i am aware of that it is less of a year since i started djing publicly so this is something people are still getting used to and my fans have been incredibly welcoming to me sharing my musical journey and letting me be me,” she writes.

However, she said she’s received criticism that she wasn’t “front and center” during her sets… even though that’s not what DJs typically do. That she was criticized for this while a DJ set from Aphex Twin wasn’t, she says, “is sexism.”

Though some complaints centered around the logistics of the “Björk Digital” five-room VR experience, which was debuting at the festival, others definitely called out Björk for not being present. One review from Culturemap Houston calls Björk’s performance the “Biggest WTF” of the festival. “Sadly, no one saw much of anything, as Björk played sound collages of Native and Spanish folk songs amongst a screen of foliage — yes, you read that correctly — dimly lit by blacklight and a neon LED costume,” writes reviewer Johnston Farrow, describing basically any EDM set.

A reviewer from Earmilk complained that Björk’s set left the “artist herself barely seen and never heard for the entire uninspired set.” However, reviews for Aphex Twin’s set noted that he barely looked up during his performance, which didn’t retract from the raves.

Björk has only recently started DJing, so perhaps it’s not her forte yet. But if you’re going to criticize her, hold her to the same standards every other DJ is held to.