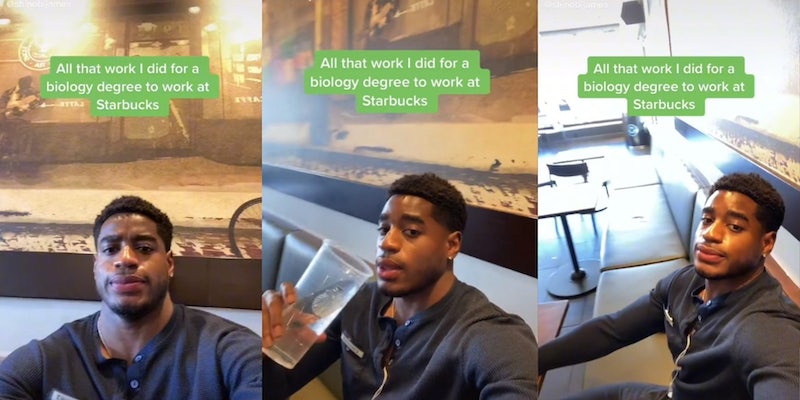 ‘All that work I did for a biology degree to work at Starbucks’: Barista complains about working at Starbucks while having college degree, sparking debate

Given the current labor market landscape in the United States, there’s a strong argument to be made that there’s never been a better time for someone to try and secure themselves new employment. With 1.9 jobs per every job seeker and many different industries still severely understaffed, folks shouldn’t have much difficulty in finding a job, at least in theory.

What isn’t discussed enough, however, are the types of jobs that are mostly available for those looking to be employed: the food service and hospitality industries account for the majority of America’s labor shortage. If you’re someone who attended college to earn a higher level of education in order to avoid working at a cafe, hotel, restaurant, grocery store, or another similar job, then you may be facing the same odds as anyone else trying to land a gig with a desirable salary, schedule, and benefits.

In fact, according to Zippia, 21% of all folks who work in the food service industry have a bachelor’s degree, with 17% holding Associate’s, and 44% having at least graduated from high school.

And now a viral TikTok sparked a debate about the United States labor market, along with the efficacy of higher-learning institutions preparing students to be self-sufficient and gainfully employed.

James Leon (@shinobijames) posted a TikTok of himself seated at a Starbucks. The seven-second clip features a text overlay that reads, “All that work I did for a biology degree to work at Starbucks.”

Other users appeared divided on James’ clip with some folks stating it was irresponsible of him to “downtalk” a degree without giving proper context into his life situation. Some stated that more schooling was the solution to his problem so he could attain work in a specialized field, while others flat out said that college is a scam without scholarships and a clear career path.

“Don’t blame the degree. U have to choose to do something with it. Go to PA school, medical school, dental school, etc.,” one user wrote.

“I don’t think creators realize how much you can scare people by downtalking a degree without giving context,” another agreed.

“An underrated skill. BECOME friends with your professors. They will open a TON of doors for you. It’s not what you know it’s WHO you know,” one viewer advised.

Many major corporations have stopped necessitating new hires to have graduated from college but instead value prospective employees with a demonstrable ability to do meaningful work, rather than present a list of credentials on a sheet of paper that may or may not be applicable to its current business model.

In fact, 50% of Apple’s employees don’t possess a four-year degree, Google doesn’t care if you graduated from college or not, and neither does Hilton, Ernst & Young, Penguin Random House, IBM, Tesla, Netflix, and many others. It’s generally believed that experience matters more than education, and employers certainly value that as much in the majority of industries and businesses. This isn’t the case, however, when it comes to academia and education. If you’re hoping to become a professor, then it would probably be in your best interest to amass degrees like you’re collecting Pokemon gym badges. However, if you’re trying to become a software engineer or programmer for Spotify, then just familiarize yourself with the coding language that the company learns on your own time, maybe get a certification or demonstrate that you possess those skills and you won’t have to worry about sitting in a lecture or tackling electives that have zero impact or bearing on your long-term life goals.

According to James’ TikTok, he’s also an aspiring actor who has managed to amass a sizable number of fans on TikTok with 1.7 million users on the platform following his posts. He writes in the caption for the post, “That actor life is crazy my boy.” In an update video, he explains that he works at Starbucks to pursue his dreams, as he has always done.

“And my dream always comes true,” he says.

The Daily Dot has reached out to James for further comment via email.