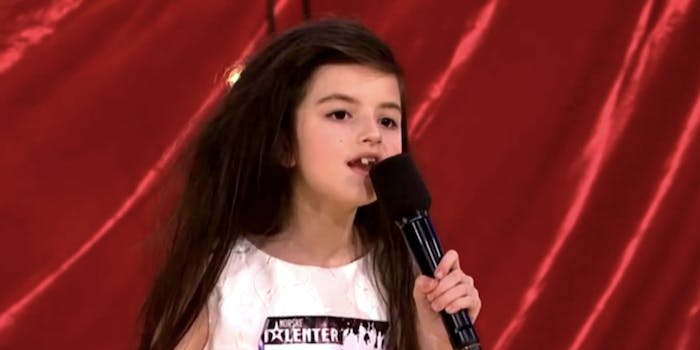 Norwegian 7-year-old does an amazing impression of Billie Holiday

Her take on Lady Day's 'Gloomy Sunday' will send shivers down your spine.

Precocious kids imitating celebrities on talent shows is nothing new. There was 16-year-old Luke Lucas, who did a spot-on impression of young Michael Jackson on the British X Factor.  There was Lin Yu Chun, the Taiwanese teen who appeared on Ellen with his rousing rendition of “I Will Always Love You.”

But these dudes have nothing on 7-year-old Angelina Jordan, a mini-Amy Winehouse on Norway’s Got Talent who blew judges away with her eerily accurate yet amazing take on Billie Holiday’s “Gloomy Sunday.”

Angelina’s performance (though I’d be more inclined to call it a séance) starts around the 40-second mark:

What’s so astounding about Jordan’s performance isn’t her range nor her technical vocal ability, although both are impressive given her age. It’s her uncanny ability to capture Holiday’s style: the impeccable phrasing, the frail yet commanding presence, the raspy, whiskey-soaked delivery. She sounds less like a 7-year-old and more like a jaded, middle-aged woman at a bar, blowing smoke in your face while telling you about all the rotten men in her life.