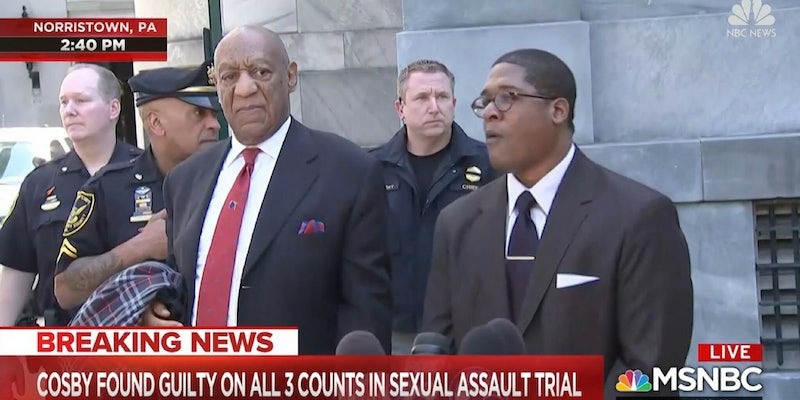 Cosby faces up to 30 years in prison.

After nearly 15 hours of deliberating, a jury found comedian Bill Cosby, 80, guilty on three counts of sexual assault against Andrea Constand. Constand, a former basketball official at Temple University, characterized Cosby as a family friend and mentor at the time of the assault.

Constand, who testified at the original trial that was decided a mistrial, testified at the second trial that Cosby gave her medication at his Philadelphia-area home in January 2004 that made her fall asleep. When she woke up, Cosby was digitally penetrating her and forcing her hand on his penis, according to Deadline. More than 50 women have come forward saying Cosby sexually assaulted them.

According to the Associated Press, Cosby burst into an “expletive-laden rant” when District Attorney Kevin Steele argued that Cosby’s bail be revoked, stating that it wasn’t high enough. Steele pleaded for Cosby to be jailed immediately because he owns a plane and is a flight risk.

Cosby called Steele an asshole, referring to himself to say, “He doesn’t have a plane… He doesn’t know,” then said, “I’m sick of him!”

Cosby faces up to 10 years in prison with a $25,000 fine on each count for a total of no more than 30 years in prison and $75,000 in fines. Cosby did not leave the courthouse in handcuffs and instead exited with his right arm raised along with his guide, who kept his left arm raised. His lead defense attorney Thomas Mesereau, who allegedly fell asleep in court, told press that Cosby’s team is “disappointed” in the verdict and that “the fight is not over.”