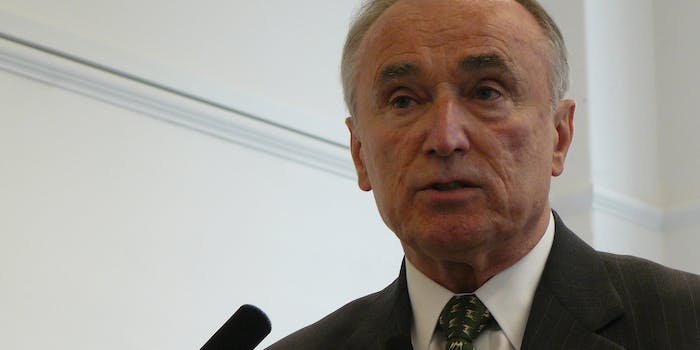 The people have spoken.

Bratton’s resignation follows months of conflict between him and De Blasio and just hours after an all-day protest outside City Hall that called for Bratton to step down.

At a press conference, De Blasio said that Bratton would retire in September and immediately be replaced by Jimmy O’Neill, an experienced cop, raised in Brooklyn’s Flatbush neighborhood, who climbed the law enforcement ranks to become Chief of Department for the NYPD in 2014.

A press release from the mayor’s office focused on O’Neill’s qualifications, with no mention of the many controversies swirling around Bratton that likely inspired his departure.

“As the architect of our neighborhood policing program, Jimmy O’Neill has built a national model for bringing police and the community together to fight crime,” said Mayor De Blasio in a statement emailed to the Daily Dot.

Bratton weighed in as well—again, without commenting on the reasons for his own retirement from his position as top cop.

“Few understand the human side of policing better than Jim O’Neill,” said Bratton. “As Chief, his innovative NCO [Neighborhood Coordination Officers] program is not only making communities safer, it has brought police and the people together. Jim has all it takes to lead the NYPD into the future.”

Missing from the official announcement was any reference to ongoing local opposition to Bratton, or to Monday’s #ShutDownCityHallNYC protest that occupied the park surrounding City Hall for hours.

According to Mic reporter Jamilah King, who attended the press conference, Bratton’s resignation was first discussed on July 8 and had nothing to do with his growing unpopularity, according to De Blasio. Even so, the mayor and both commissioners referenced the NYPD’s failures and a new approach to policing that would take place under O’Neill’s reign.

Bill de Blasio: Bratton let him know of resignation on July 8. "Protests had 110% nothing to do with this." #NYPD

"We're trying to change our reputation from being "the" police to being "our police." Bill Bratton NYPD

The #ShutDownCityHallNYC protest, and others preceding it, focused on Bratton’s implementation of “broken windows” policing—a theory he created that suggests cracking down on small infractions like graffiti, loitering, and panhandling would lead to less overall crime. Critics of broken windows policing say that it creates disproportionate police harassment and arrests in low-income black and Latino neighborhoods and leads to increased racial profiling.

Campaign Zero, an initiative formed to study and lower rates of police violence and killings, found that police killed 287 people in 2014 alone—all of whom were engaged in nonviolent, minor offenses like “sleeping in parks, possessing drugs, looking ‘suspicious’ or having a mental health crisis.”

Police brutality victims like Eric Garner—the father of six suffocated to death during an NYPD arrest for selling cigarettes on the street in Staten Island—have been cited as the direct result of the broken windows model.

Bratton’s resignation was celebrated online by many, showing a wide span of people long frustrated by the unsolved problem of police violence in the United States.

Me asking Bill Bratton what he plans to do after he retires.. pic.twitter.com/fzUFfWVTEk

Bratton’s resignation from the commissioner post also came just days after a nationwide protest in which anti-police brutality advocates chained themselves to the lobbies of police union headquarters.

In New York on July 20, members of the Black Youth Project chained themselves to the turnstiles of the police union building’s lobby, chanting “Stop murdering us.”

In a video of the event reported by the New York Post, one protestor can be heard summarizing some of the concerns that drove the young activists to chain themselves inside.

“We’re here today to demand three things,” said the activist, “Number one: Fire Officer Isaacs who murdered Delrawn Small in Brooklyn. Number two, divest from policing and invest in solutions that actually keep our communities safe. And don’t murder us!”