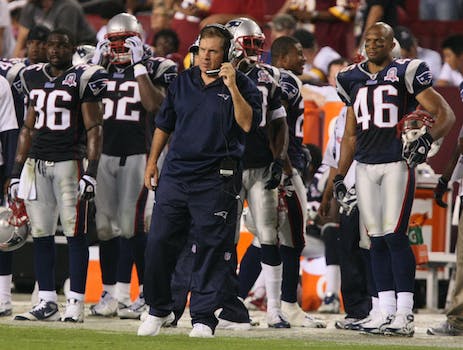 That's one way to set the tone of a wedding.

Nothing says “mark your calendars to celebrate us spending the rest of our lives together” than a man who many believe to be in league with Satan.

New England Patriots coach Bill Belichick is not exactly synonymous with romance, but Jessica Dempsey and Scott Julian clearly disagree. The soon-to-be-married couple put the coach’s face on their “Save the Date” cards, which recently went out to family and friends. Dempsey and Julian will be getting married on Oct. 24 in Connecticut, at least an hour away from the Patriots’ Gillette Stadium in Foxborough, Mass.

It was a clutch move, one that even impressed the Patriots—or at least, whoever runs the Patriots’ Twitter account.

The biggest question, of course, is as follows: If Dempsey and Julian are football fans, why would they set their wedding date for the middle of the football season?

For starters, October is one of the most popular months for weddings. The date also seems to have been strategically planned: Oct. 24 falls on a Saturday, and there’s rarely an NFL game on Saturdays. (College football, however, is a different story.)

Word’s still out on the 2015 NFL schedule, but we hope the Patriots can get a day off the Sunday after the wedding. After all, Dempsey and Julian can’t not at least try to invite Belichick to their nuptials.