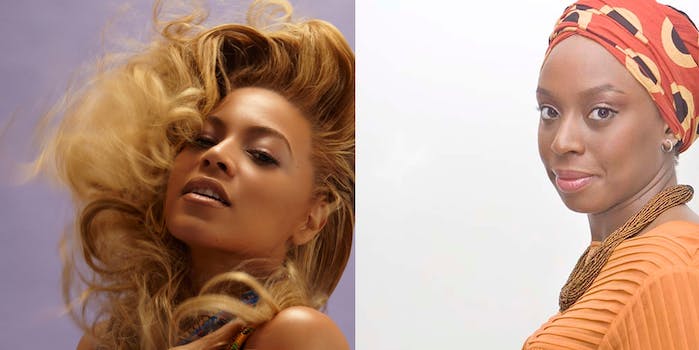 Kanye had a cameo from ‘God,’ Beyoncé has Chimamanda Ngozi Adichie

The Nigerian writer and feminist is the surprise highlight of Beyoncé's surprise new album.

The biggest highlight of Beyoncé’s surprise new album isn’t the guest turn from hip-hop darling Frank Ocean, or the part where she croons on “Blow” that when you lick her Skittles, it’s the sweetest in the middle. No, it’s the part where Nigerian writer Chimamanda Ngozi Adichie shows up to help Queen B give the finger to a year of handwringing over whether or not she’s a real feminist.

Beyoncé is undoubtedly making a statement with this iTunes-only album, and nothing says it more than “Flawless,” in which she samples excerpts from a TED talk Adichie gave earlier this year titled “We should all be feminists.”

What does it mean and why is this the highlight of the album of the year? Here are five reasons:

1) Mrs. Carter is laying down the law.

In “Flawless,” she takes on white feminists who have spent the last 18 months asking each other if Beyoncé can truly be considered a feminist icon given her insistence on taking her husband Jay Z’s name and dubbing her most recent tour “Mrs. Carter.” “Feminist or Fauxminist?” asked the Huffington Post last year. The Atlantic just wasn’t sure, either. In the April edition of Vogue, Beyoncé was ambivalent on the subject.

There’s nothing ambivalent about her now. In “Flawless” she addresses her critics, reminding them that when they were girls they idolized her. “Respect that,” she admonishes. Then she states, “I took some time to live my life / but don’t think I’m just his little wife.”

Then she quotes a section of Adichie’s speech in which the 34-year-old writer discusses marriage:

Now marriage can be a source of joy and love and mutual support. But why do we teach girls to aspire to marriage and we don’t teach boys the same?

As they say in H-town: Boom.

White liberals have been in love with Adichie ever since her 2009 TED talk, “The Danger of a Single Story,” went instantly viral. Just like her previous TED speech, “We should all be feminists” was a sensation. Feminists were ecstatic. Tumblr GIF-fed it and passed it around nearly half a million times.

Beyoncé doesn’t need anyone to make statements for her. But if you’re going to use someone else’s words to prove your point to a community that has a tendency to talk over you, there are no words better to make people stop talking and pay attention.

3) Yoncé is telling her critics not to pigeonhole her into a Single Story.

If you’re a fan of the warm-fuzzy liberal circle jerk otherwise known as the TED conference, then you already know who Adichie is. Even if you’re a cynic, Adichie’s instantly viral 2009 TED talk indicted a century of colonial narratives and cultural reinforcements of those narratives. It was a talk that sent a shock wave through communities of privileged white liberals who talked about equality but never understood the ramifications of always being the ones who held the microphone, always getting to tell stories about the cultures they colonized.

In “Flawless,” Beyoncé shows that she was listening. “Don’t get it twisted,” she says, regarding the narrative of her marriage to Jay Z.

4) If you think it’s about sex, you’ve missed the point.

“Beyoncé drips of sex,” was the Daily Beast’s take on Beyoncé. “The Main Takeaway From Beyoncé’s New Album: Beyoncé Is Really Good At Sex,” echoed Uproxx.

But “Flawless” shows that Beyoncé was ready for this and anticipated the critical reaction. Another section of the sampled quote from Adichie reveals that to Beyoncé, “sex” is just another word for “empowerment”:

We raise girls to see each other as competitors

Not for jobs or for accomplishments

Which I think can be a good thing

But for the attention of men

We teach girls that they cannot be sexual beings

In the way that boys are.

Feminist: the person who believes in the social

Political, and economic equality of the sexes

5) Beyoncé is making her case that all girls are flawless.

Adichie is a Nigerian writer but she has occupied the world stage for a while. She’s been showered with awards for both short stories and novels, and she won a MacArthur “Genius” Fellowship at the age of 31. Her latest novel, Americanah, is currently carving a spot for itself on all the year-end Top 10 lists, and her novel Half of a Yellow Sun is a highly anticipated upcoming movie starring 12 Years a Slave’s Chiwetel Ejiofor:

In an interview with the New Yorker, Adichie states that she has been writing since she was “old enough to spell.” Like Beyoncé, who starts “Flawless” with a clip from an early appearance on Star Search when she was 11, Adichie has always had a voice. “We teach girls to shrink themselves,” she says in the sampled speech on the album, “to make themselves smaller. We say to girls, ‘You can have ambition, but not too much.’”

When Beyoncé sings “I woke up like this” in the refrain of “Flawless,” you believe it, because she’s Beyoncé. But when she joins her voice with Adichie’s, she becomes more than a singularity, but part of a pattern of women learning not to shrink:

Say I, look so good tonight

Say I, look so good tonight