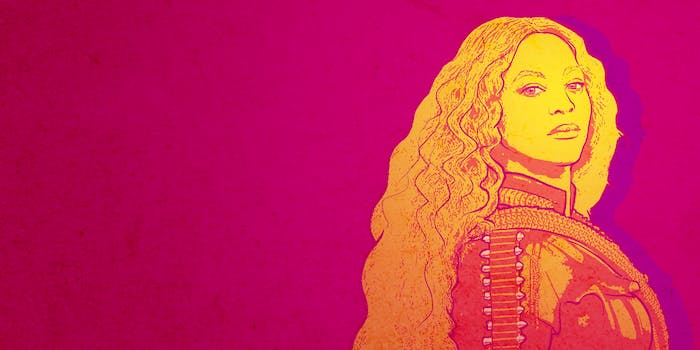 The woman who took on an entire presidential administration just made the most powerful enemy of her life.

As SNL taught us last weekend, anyone who dares to correct or criticize Queen Bey will face the wrath of the Beygency, a shadowy group of undercover operatives tasked with keeping Beyoncé fans in line.

One brave woman has dared to voice her critique of a lyric from Queen Bey’s latest album. And that woman is none other than notorious ’90s seductress Monica Lewinsky.

In an excerpt from an upcoming Vanity Fair essay, Lewinsky issued a correction to a lyric from “Partition,” which references the Clinton-Lewinsky scandal with the lyrics “He popped all my buttons and he ripped my blouse/He Monica Lewinsky’d all over my gown.”

“Thanks, Beyoncé, but if we’re verbing, I think you meant ‘Bill Clinton’d all on my gown,’ not ‘Monica Lewinsky’d,’” Lewinsky writes.

She is not wrong.

Unless “Monica Lewinsky’d” is a euphemism for “designing handbags” or “getting a master’s degree in psychology” or “writing a first-person longread for Vanity Fair,” all of which Lewinsky has done, it would be more accurate to say that Beyoncé’s gentleman suitor had “Bill Clinton’d” all over her gown.

Nonetheless, Lewinsky going up against Queen Bey in Vanity Fair is a pretty ballsy move, even for a woman who sexed up a commander-in-chief while he was on the phone with a member of Congress. Let’s see if she mysteriously “disappears” or is forcibly relocated by the Beygency before her essay goes live online May 8.