If you're tired of complaining to your friends, take it to the BBB.

The common assumption is that online dating is full of misery. Before you even get to a date there’s the awkwardness of setting up a profile. Then you have to answer dozens of questions about values you never thought you had. And then there are the algorithms which, after all that, match you with a guy twice your age who lives two states away and thinks it’s a woman’s responsibility to shave her legs for a man. Much can go wrong, and when something does, most people just complain to their friends.

But as Margaret Mead said, “Never doubt that a small group of thoughtful, committed, citizens can change the world.” You can complain, or you can take action. That’s exactly what some concerned citizens are doing: The Better Business Bureau is reported to have received 2,630 complaints against Match.com in the past three years, with 835 unanswered complaints that have led the BBB to give the company an F. And Match isn’t the only online dating site to get a failing grade. The Daily Dot did some investigation into how some other sites are doing. (Answer: mostly not great.)

D-. To be honest, we’ve heard a lot worse things about Tinder than this.

A+ (but with tons of complaints). Though if your main complaint is “there is a man being an asshole online,” maybe online dating isn’t for you. 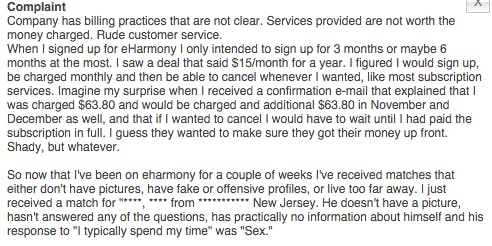 F. Because “I have been emotionally traumatized from my experience” is the rallying cry of the Internet.

F. Because this is legit bullshit.

A-. If your invisible boyfriend is going to be lazy and bad at texting he may as well be an actual boyfriend.

F. If this guy wanted to be unpopular he could do that for free.

No Rating, and NO ACTUAL FARMERS. When will my true farmer arrive?

It’s good to know the BBB is on top of all this. Now, if only there were a place to complain about dudes who send unsolicited dick pics at 3am.