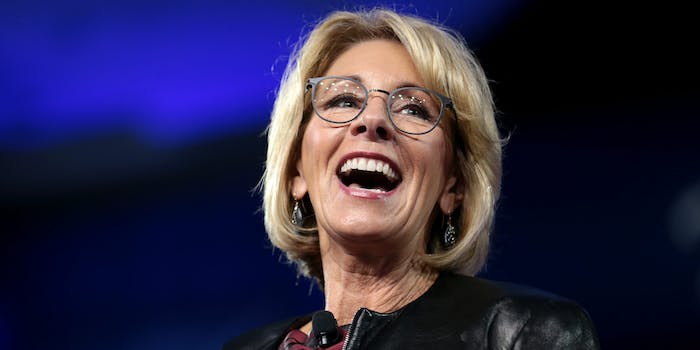 It remains unclear how the education secretary will move forward with Obama's Title IX guidelines.

Men’s rights activists have traditionally criticized the Obama administration’s Title IX guidelines on how to handle sexual assault on college campuses. And now, Department of Education Secretary Betsy DeVos is turning to several MRA groups for advice on how to enforce those guidelines under the Trump administration.

In order to make a decision, she is meeting with both activists for college sexual assault survivors as well as organizations that work on the behalf of students accused of sexual assault. The latter groups include Stop Abusive and Violent Environments (SAVE), Families Advocating for Campus Equality, and the National Coalition of Men. While, on the surface, many of these organizations defend men falsely accused of sexual assault, several groups have ties to the men’s rights movement and its misogynistic online spaces.

The Southern Poverty Law Center, for example, lists SAVE as one of several sites in the anti-feminist and highly misogynistic “manosphere,” which SPLC characterizes as “thick with misogynistic attacks that can be astounding for the guttural hatred they express.” SPLC criticizes SAVE for “lobbying to roll back services for victims of domestic abuse and penalties for their tormentors, while working to return the focus to the ‘true victims of abuse’—the falsely accused.”

SAVE has experienced legal victories in the past, too. Arthur Goldwag at the Washington Spectator credits SAVE with working to “undermine the Violence Against Women Act because, among other reasons, it ignored the problem of violence against men.” SAVE believes that men, not women, experience domestic violence and sexual assault in higher numbers.

Meanwhile, the National Coalition for Men (NCFM) has a legacy of misogynistic behavior that damages rape survivors. A Mother Jones feature on the men’s rights movement reveals that the coalition previously “fought to cut off state funding for domestic-violence programs if men aren’t included.” Meanwhile, Pacific Standard reveals that some NCFM chapters host a “false victims” page online, sharing headshots of rape victims whose cases were dismissed by a college disciplinary board or police. NCFM believes that women should not be protected by the government, because, as one coalition member puts it, “historically, they have been no more discriminated against because of their sex than men have.”

“Men have a long list of oppressions too, and if we are going to award protected status based on that then men (as a group) should be in line ahead of women,” one member explained, according to the Pacific Standard reports. “It is time for the ‘Titanic effect’ of chivalry (men relinquishing seats in the lifeboat to women) to be buried in courts of law and all other social institutions.”

It remains uncertain if Betsy DeVos and the Department of Education will any make changes or revoke the Obama administration’s Title IX guidelines for handling sexual assault on college campuses. However, Slate reports that DeVos has previously donated to the Foundation for Individual Rights in Education, which has worked to overturn President Obama’s work on fighting sexual assault across college campuses.