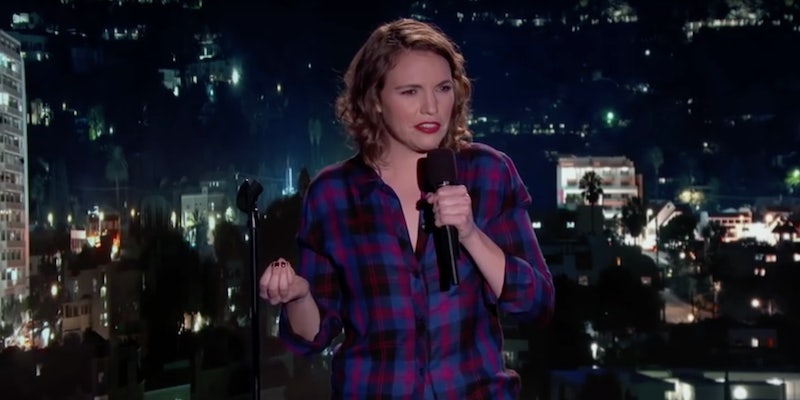 'After being verbally, physically abused and raped, I dated him for two more months.'

This article contains graphic images and discussion of domestic violence.

Comedians are often the best people to talk openly about the horrors of life. Laughter can dull the pain, and framing oppression and heartache in the context of comedy can allow for more honest and nuanced discussions than are often possible in polite society. But the most talented comedians know when it’s time for gallows humor and when it’s time to take a risk and be completely serious.

On Monday comedian Beth Stelling posted a photo collage to Instagram. But instead of promoting a comedy special or a recent photo shoot, Stelling used the platform to reveal something deeply personal.

The collage features four jagged photos, all of Stelling. The image featured in the top right corner is one familiar to many: the comedian holds a microphone, smiling, mid-performance. The other three images show bruises all over Stelling’s arms, legs, and feet. In the accompanying caption, she reveals that the bruises were inflicted by her ex-boyfriend.

“When I broke up with my ex this summer, it wasn’t because I didn’t love him, it was because of this,” Stelling shared, confessing this chapter of her history publicly on the Internet for the first time. “When friends or comics ask why we broke up it’s not easy or comfortable to reply; it doesn’t seem like the appropriate thing to say at a stand-up show, a party or a wedding.”

Stelling’s story is sadly common: The National Coalition Against Domestic Violence estimates that one in three women—and one in four men—are survivors of intimate partner violence. Beyond the immediate physical harm caused by such incidents, survivors of abuse are susceptible to long-term effects, including STIs, reproductive health complications, post-traumatic stress disorder, and suicidal ideation. Often, the stigma that encourages survivors to remain silent about their experiences only worsens these damaging consequences.

Even leaving an abusive relationship can be a terrifying risk. Like other survivors of abuse, extricating herself from the relationship was a painful and difficult process for Stelling. “After being verbally, physically abused and raped, I dated him for two more months,” she wrote. “It’s not simple.”

But now, months after her breakup, Stelling is sharing her story. According to her post, she initially avoided discussing the abuse in her comedy out of respect for his wishes. “I wrote vague jokes because we both live in L.A. and I didn’t want to hurt him, start a war, press charges, be interrogated or harassed by him or his friends and family,” she explained. Eventually, though, the silence became “unhealthy,” and she decided that she needed to be true to her voice—both as a comedian and as a person.

“My personal is my professional,” Stelling continued. “That is how I’ve always been; I make dark, funny.”

Within the first two hours after Stelling posted it to Instagram, the collage had been “liked” more than 800 times. Just as quickly, Stelling’s fans, friends, and colleagues moved to Twitter to express their support and solidarity.

@BethStelling thank you so much for sharing your story.

Stelling isn’t exclusively speaking out about her abuse online; her post reveals that she has already started to incorporate the story into her Los Angeles standup sets. And in her efforts to be honest and funny, she is giving voice to countless women who are unable to be as public about their own histories.

“Already since talking about this onstage, many women have come to me after shows asking me to keep doing it,” wrote Stelling.

If you or someone you love is currently in crisis with an abusive partner, contact the National Domestic Violence Hotline immediately: 1-800-799-SAFE.