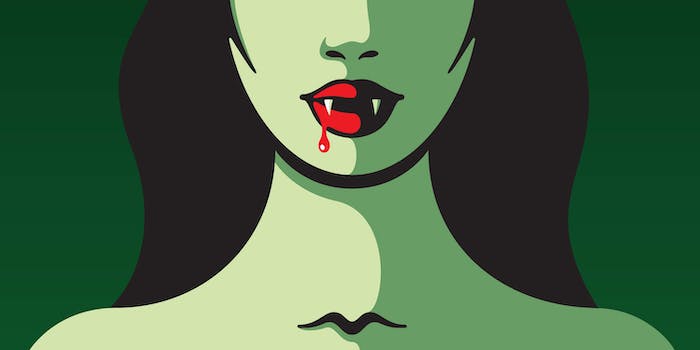 Thanks in part to Bram Stoker’s 1897 Dracula, vampires have surpassed supernatural mythology. Now, they’re figures of lust, desire, existential fear, and homoeroticism. And vampires aren’t always depicted as evil forces corrupting the world; in fact, many queer depictions of vampires show them as sympathetic or even lovable beings. Others depict vampires as tempting seductresses who make their victims quake with fear and desire at the thought of being ravished.

“Usually girls ask for it on their lips,” Velvet teases, as Sunny blushes and nervously giggles, “their neck, or their thighs.” We’ll gladly take all three.

Developer Lustful Illumination offers an early demo on itch.io showing dungeon gameplay, complete with puzzles to solve and enemies to devour. The studio is currently working on the game’s open-world, which will feature quests and characters to meet while shaping Kalyskah’s path. For more information, head over to Kalyskah’s Patreon.

Joseph Sheridan Le Fanu’s Carmilla is both the predecessor to lesbian vampire fiction and one of the most important Gothic novellas of the 19th century. And while Carmilla isn’t pornographic, it’s still ridiculously hot if you’re gay and have a thing for vampires.

Told through the characters’ letters, Carmilla follows a young woman named Laura who befriends the titular stranger, Carmilla. As it turns out, Carmilla is a vampire, one who feasts on other women. Long considered an analogy for sapphic desire and lesbian sexuality, Laura is infatuated with Carmilla’s beauty. And Carmilla doesn’t exactly hide its antagonist’s desires.

“I am sure, Carmilla, you have been in love; that there is, at this moment, an affair of the heart going on,” Laura says, to which Carmilla responds: “I have been in love with no one, and never shall, unless it should be with you.”