“Girl I’m no weatherman but you can expect a few inches tonight.”

“You remind me of a can of biscuits, because I want to bang you on my kitchen counter.”

Would it surprise you to learn that awful Tinder pick-up lines like this aren’t exactly original? On forums across the Web devoted to guns, shoes, pick-up artistry, and bodybuilding, Tinder bros are crowdsourcing the most dumbfounding opening lines they can Google. Why? To catch the attention of women, to make us laugh and to mess with us, I guess. It’s occasionally flattering and often revolting. (And surprising: pick-up artists needing pick-up lines? I thought they had it on lock!)

To give these men a little credit, the Tinder opening line is a valid concern. It requires special attention. More than any other form of online dating, Tinder most resembles an old-timey singles bar. All you have is your face, your best line, and your situational assurance that the odds this attractive stranger will let you put your face on their face are slightly better than average. There aren’t in-depth profiles to read and respond to, so it’s more difficult to approach someone on a human level and ask about their interests or hopes or fears or favorite movies or whatever. Having a clever standard opener streamlines an already streamlined process.

“Do you like to draw? Because I put the d in raw.”

But to take some that credit away, many of these lines are being crowdsourced with the intention to “smash sloots,” as the users of forum.bodybuilding.com like to say, and they are ultra rank. They are way more gross than sexy, and kind of demoralizing to read. On the bright side, when a lady encounters a line like “I spent all day hiding chairs… so you’d have no choice but to sit on my face,” she knows right up front that she’s dealing with a garbage monster who doesn’t care that she’s one of God’s precious children, and that knowledge—like having a standard opener—really streamlines the process!

Plus, some really aren’t bad! One or two are even kind of funny.

Here are some of the best and worst lines from the best-worst places: 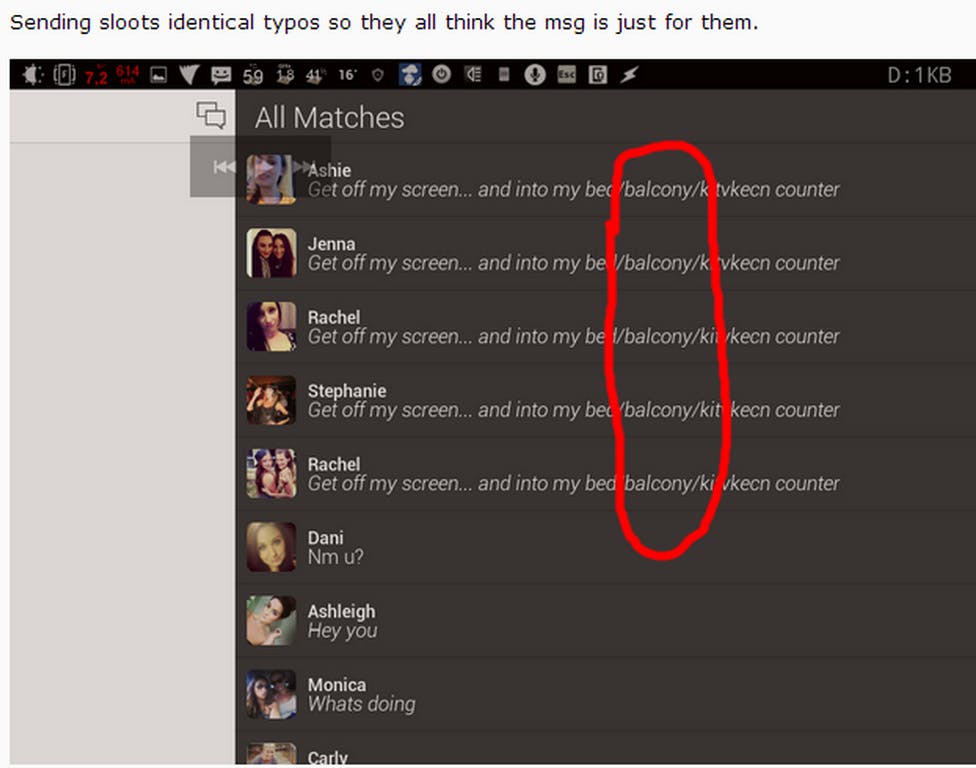 Bodybuilding.com’s musclebound buddies have created an official Tinder thread because they smash so many sloots, and it’s currently on it’s eighth iteration. The first page of each official Tinder thread lays down the ground rules, offers sample lines with possible responses (they’re mind-readers!) and even includes a whole separate Pastebin doc full of openers. Still, gymbros everywhere are wisely warned that even the best line won’t close the (sex) deal. As user bambam601 writes, “you need to realize that if you can’t come up with your own responses and only rely on misc lines, you’re in deep **** when you meet the girl. … We can’t be guiding you every step of the way, and you need to develop your own game.” Word, bambam601, you are a leader among men.

The Skeptical Masturbator: “Listen, I know this profile is fake but can I get the name of the model you used so I can look her up for later tonight?”

The Weird Guilt Trip: “I have 4% battery remaining. I chose to message you. Did I choose wisely?”

The Dick-Picasso: “Do you like to draw? Because I put the d in raw.”

The Zoologist: “Are you a Koala?” [regardless of answer] “Well, you’ve got all the koalifications.”

The One Who Ruins Pancakes but Is, at Least, Right About Pancakes: “Do you like pancakes?” [positive answers only, if she says no then she’s just stupid] “Well how about iHop on that ass.”

Easily my favorite Tinder pick-up thread on the whole Internet can be found on AR15.com—“Home of the Black Rifle.” AR15.com, as you already know, is your favorite site for talking about guns, looking at pictures of guns, even finding guns for purchase. Their enterprising userbase has put their forums to work: messaging Tinder matches with thread titles.

“Girl I’m no weatherman but you can expect a few inches tonight.”

Like BuzzFeed’s You’ve Got Mail pick-up lines or the questions from The Interrogative Mood being employed over at The Interrogative Dude, using odds and ends from your own real world as found pick-up lines is actually surprisingly charming. Non-sequitur is as good as any other form of contact on Tinder! And if your choice of non-sequitur reveals you to be a possibly racist gun nut, then you do you. 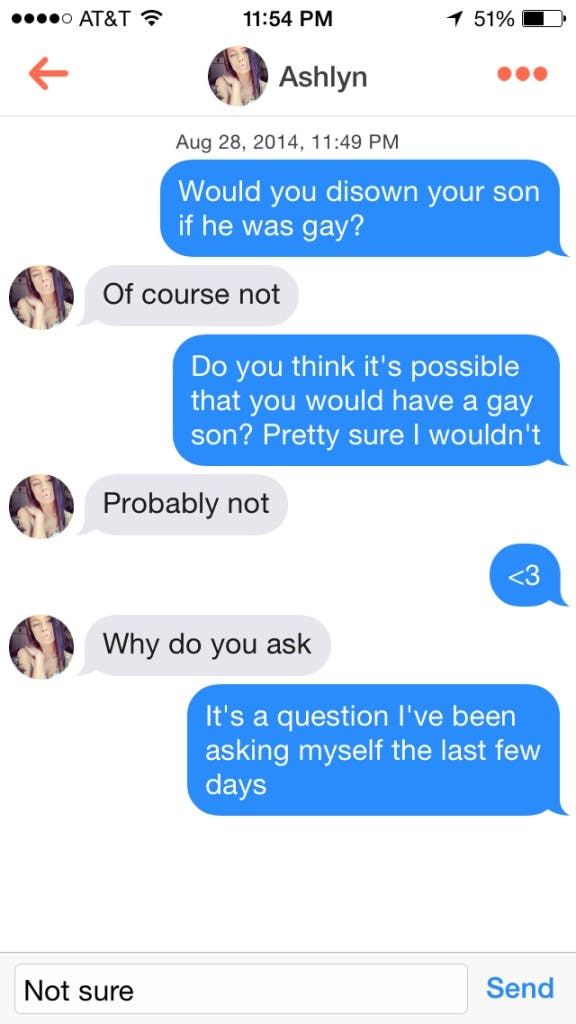 The Well, That’s Never Going to Work: “In a little more than 24 hours… I’m getting married.”

The Concerned Father Oops I Meant Gross Bigot TYPO: “Would you disown your son if he were gay?”

The South Will Rise Again: “What does the confederate flag mean to you?”

The Genuinely Terrifying: “If you died, would anyone find you?”

Hypebeast seems to be a men’s fashion blog slash retail outlet with an active forum of readers. What it says it is: a site “focused on the progression of fashion through visual inspirations and the provision of knowledge,” which: huh?

“Stir up her emotions right away. … Force her to respond.”

But their readership, like those of the pick-up artist and bodybuilding communities, likes to use creative spelling for homophobic phrases and talk about “betas” a lot, so naturally Tinder is a strong concern. Although some readers of Hypebeast are concerned the app is racist (which: legit), they still try to put their best fashionably shoed foot forward.

“If you died, would anyone find you?”

The Anti–Pick-Up Line: “Do you want me to hit you with a corny pickup line or can we skip the bs?”

The Classic Tennis Neg: “I bet you suck at tennis.”

The Not Weatherman: “Girl I’m no weatherman but you can expect a few inches tonight.”

The Historian: “You think Ben Franklin tried tying other stuff to a kite before the key thing worked? … Just sitting there strapping waffles to a kite… what an idiot.”

Simple Pickup, as I’ve gathered, is a forum devoted to the 18th-century children’s pastime Pick-Up Sticks. These guys just want to bring back the heart and soul of the game: using wooden sticks to retrieve—or “pick up,” in their parlance—other wooden sticks. Coincidentally, male devotees of this activity are also very interested in meeting nice women, so they’ve devoted a thread or two to the app in question.

“My default pic is me sitting in a bathtub, being weirdly dressed.”

The Eager Father-to-Be: “Tinder brought us together for a reason and that reason is babies.”

The National Treasure: “You look like a female version of Nicholas Cage.”

The Technical Glitch: Text 1: “I’m taking a huge shit.” Text 2: “Hey how are you* damn autocorrect”

The Rape Joke That Finally Broke My Spirit So Now I Am Lying Down, Crying Softly and Googling Nunneries: “Roses are red, violets are blue, we’re having sex because I’m stronger than you.”

That was it. I couldn’t go on any longer after that.

Clearly, the only recourse for women is to take to the frozen yogurt and purse-dog forums of the world, where together we can brainstorm lines that will strike fear into these bros’ steroid-shrunken hearts. Lines like, “You look like you’ll be a great dad, very kind eyes!!” or “I’ll require a princess cut diamond from Tiffany’s. I’m not interested in whatever dinky shit your grandmother brought over from the old country,” or “How big is your package, sailor? I when I say package, I mean wallet [Money Bag Emoji] [Money Bag Emoji] [Money Bag Emoji].” Lines like this.

Alternatively, and I’m open to this, we could really double down on the whole #banmen movement.

But, and this might be absurd, there’s a third option: we could all try a new thing, where we practice talking to each other like people—probably nice, maybe slightly lonely, real and actual people—who are open to making some kind of connection in a very strange new dating world. It’s so crazy it might work, and it might even get us laid.