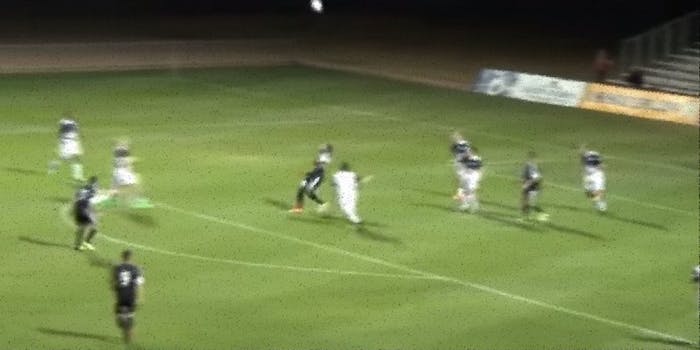 It's pretty hard to score standing up in soccer, much less by leaping through the air with your back to the ground.

There’s probably no flashier play in soccer than the bicycle kick. But the fact is, for your average pro successfully landing one isn’t that hard—every other game it seems some defender leaps off his feet, back to the ground, and knocks the ball out of danger. What’s really hard is getting it to go exactly where you want—say, in the upper-right corner of your opponent’s net.

And the bicycle kick gets even harder with distance, becoming a near impossibility as you reach the 18-yard line. Unless you’re Odaine Sinclair, a semi-pro playing for FC Tucson, who on Thursday night landed what’s easily one of the best bicycle kicks ever caught on camera.

In the clip, a defender for opposing side BYU Cougars poorly clears a pass towards the top of the box. Sinclair, without a moment’s hesitation, leaps what must be nearly four feet off the ground to pound the ball past BYU’s dumbfounded keeper.