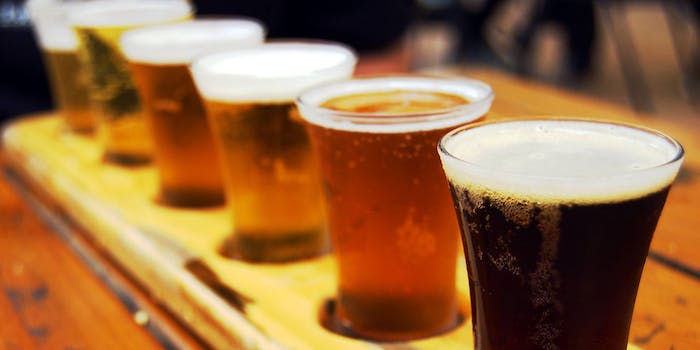 Some of us have a much different way of celebrating the art of drinking responsibly.

For some, St. Patrick’s Day is a celebration of culture and heritage. For most, it’s an excuse to get day drunk and pinch strangers on account of what they’re wearing (or what they’re not).

And for everyone else, it’s an excuse to avoid leaving home that day.

True beer lovers don’t need a holiday to celebrate their favorite fermented drink. They’d rather sip a pint in peace than have to shout at a bartender to serve them anything that’s not colored green.

These beer gadgets and accessories are for those who have a much different way of celebrating the art of drinking responsibly. Beer is best enjoyed icy cold, but actual ice has no business near your drink, unless it’s in the cooler. Keep your drink perfectly chilly long after you open the bottle, so you can take your time enjoying every sip. It’s far more ideal than chugging or lukewarm beer. If you’re at a party and uninterested in sharing your favorite brews, keep them out of the fridge where potential booze thieves can snatch up.  This holster secures your six-pack of cans or bottles, while keeping your hands free. (Or at least keeping the hand that’s not feeding you beer free.) As much as any beer enthusiast would love a personal kegerator, the price and maintenance can be a major setback. However, there is no denying that any drink tastes better on draft. The Fizzics Beer System is like a mini tap on the go. It gives any bottled or canned drink that fresh, frothy flavor, holding up to 64 oz. at a time. It may not chill your drink, like a kegerator, but it makes up for that in convenience, requiring nothing more than a couple AA batteries. Everyone loves a showerbeer. It’s a small, understated luxury. Ensure that your drink stays cold and secure in the steamiest of showers with this koozie. The koozie is attached with velcro to a waterproof adhesive, so you don’t have to worry about it going anywhere. Is there anything more satisfying than the perfect head? Ahem, we’re talking about beer, here. Pouring beer is an art, and when done correctly, the head releases aromatics that enhance flavor. Once your beer loses that frothy top, the bubbles no longer pop and the aroma is reduced. This battery-powered vibrating coaster keeps your beer frothy to the last drop. Just because you’re no longer hitting up sweaty, crowded bars or playing beer pong off a door-turned-table doesn’t mean you aren’t capable of fun. This drinking game is for people who like to party, as long as that party doesn’t involve leaving their couch. Perhaps more satisfying than a beer itself is the first sip of a beer made with your own two hands…plus science. This kit has everything you need to make six gallons of beer, which amounts to about 64 bottles. Considering a six-pack costs around $15, you’re already profiting from the first batch. But you’ll be too busy beaming from the taste of beer you made yourself to think about numbers. If you’re going to get hammered, do it with class. This simple tool is so sleek, you might not even notice it’s a bottle opener and corkscrew in one. What’s the point in packing a growler if you don’t have cups to share? This set is perfect for beer-loving adventurers because the stainless steel, vacuum insulated growler comes with four tumblers that have different colored sleeves, so you know which beer is yours. Maybe you enjoy beer better when it’s hard-earned. Maybe you’re a sadist. Regardless, this beer holder is sure to sober you up. The wooden contraption will not release your bottle until you’ve solved the puzzle. If a cold beer doesn’t go in your hand without a grill fired up, this party machine will make barbecues even better. This cooler doubles as a Bluetooth digital music player and FM radio, with two built-in water resistant speakers. The KoolMAX can jam for up to 16 hours of playtime on one charge, and there’s a flashlight attached so you can keep the party going after dark. (Because the last thing you want to do is rummage through ice in the dark for your preferred beer.) It also totes up to 48 cans, so plenty for sharing. When it’s time for bed after a nice, thick nightcap, sometimes you just want a good story to lull you off to sleep. For any child who grew up ending every night with Goodnight Moon, you can still feel like a kid at heart—unlike your stomach, which is probably full of beer.

Photo via Flickr/theNerdPatrol (CC by 2.0)