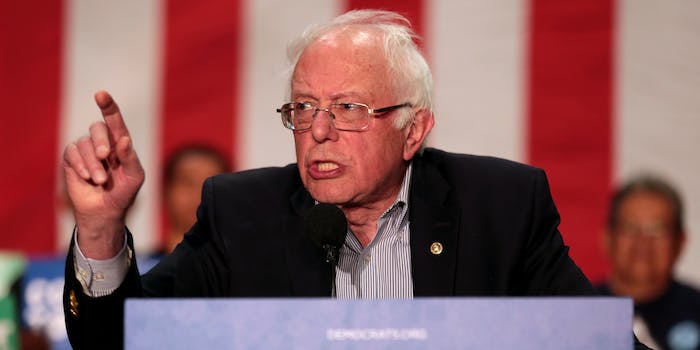 Sen. Bernie Sanders (I-Vt.) has Twitter hitting back after an event commemorating the death of Dr. Martin Luther King Jr. on Wednesday, where he made comments aimed at the leadership of former President Barack Obama.

Sanders’ comments, however, took a turn for the outrageous when he called the “business model” of the Democratic Party a failure over the past 15 years. He elaborated that people “sometimes don’t see that because there was a charismatic individual named Barack Obama. He was obviously an extraordinary candidate, brilliant guy.”

Beyond that, the senator said, Democrats lost a record number of legislative seats across the U.S. to Republicans, as well as lost control of Congress during Obama’s presidency.

Bernie in Jackson, Miss.: "The business model, if you like, of the Democratic Party for the last 15 years or so has been a failure.. People sometimes don't see that because there was a charismatic individual named Barack Obama." (1/2)

"He was obviously an extraordinary candidate, brilliant guy. But beyond that reality," Sen. Sanders says, Democrats have lost a record no. of legislative seats.

For Sanders, who lit a fire under the Democratic Party and presidential candidate Hillary Clinton during the 2016 primary and continues to distinguish himself as an anti-establishment player among centrists, these comments weren’t as much surprising to audiences as they felt tactless. To call former President Obama a “charismatic individual” and “extraordinary candidate” in Jackson, Mississippi, of all places, on the 50th anniversary of Dr. King Jr.’s assassination, of all days, felt discounting to critics, who expressed their frustrations on Twitter.

TIME AND PLACE. Critique Obama, on specific points of policy, and I will hear it – even if I disagree. Go to Mississippi to recognize the 50th anniversary of MLK's assassination and use the occasion to attack our only black president? Come on. That's not subtle.

It might be a different, hippie-flavored brand of white supremacy from Trump's, but it's still ultimately what makes someone as overall unaccomplished as Bernie Sanders believe he can speak patronizingly about Barack Obama.

To all those tweeting me Brrnie Sanders was right about what he said about PBO etc. When you are advocating in the space of Black History it is incumbent upon you to not disrespect or belittle our history in *that* current space.

When they gonna ask Bernie to sit down and shut up like they do Hillary? https://t.co/amvJoUE775

To use that platform, this day, to lecture the most dedicated Democratic voters whose lives hang in the balance every election that they are failures, that Obama was a mulligan (as if he didn’t work hard), is an abomination.

Even before Sanders’ comments drew ire on social media, his appearance at the Jackson town hall wasn’t completely appreciated by the community, expressing similar sentiments the internet had latched onto just hours later. In a piece published by the Jackson Free Press, writer Laurie Bertram Roberts, who is also a grassroots activist and co-founder of the Mississippi Reproductive Freedom Fund, wrote, “Bernie cannot come to the cookout. Sorry, not sorry.”

Bertram Roberts’ piece expressed that Sanders had no place being invited to the town hall for the senator’s repeated argument that class issues are more concerning than racial issues, and his denouncement of “identity politics” and flexibility on reproductive justice and abortion rights.

“So far [Sanders]’s just playing the hokey pokey with social justice and, frankly, black people and especially black women don’t need any more white so-called allies who do that,” Bertram Roberts wrote. “Martin Luther King Jr. was many things but he was never a man who was flexible about human rights. He died working for economic and racial justice. He certainly wasn’t a man who didn’t understand intersectionality even before we had a word for it. The Poor People’s Campaign is an intersectional vision.”

Sen. Sanders’ office did not immediately return the Daily Dot’s request for comment.