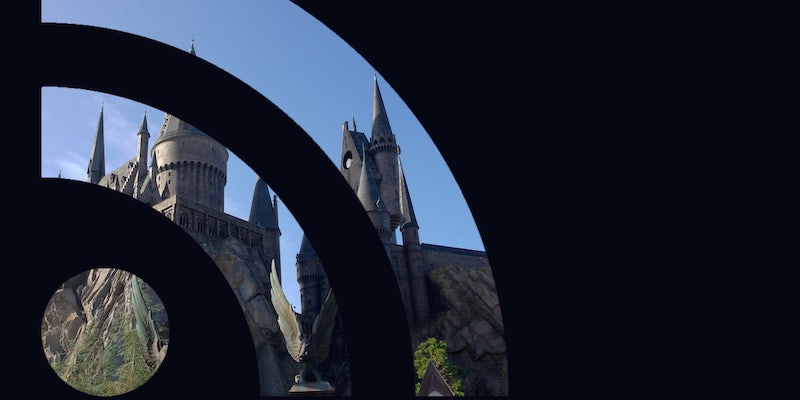 Mugglecast's Ben Schoen decided to use his powers for evil.

Grace Spelman once pretended to be a ghost on Tinder, but now she’s the one who’s being haunted.

Exactly one year after Gamergate and the misogynist crusade to take down female gamers exploded, Spelman, a writer for BuzzFeed, shared a disturbing story about yet another man behaving inappropriately aggressive online.

As a teen Harry Potter fanatic, Spelman friended Ben Schoen, one of the hosts of popular podcast MuggleCast, on Facebook. On Monday, she took to Twitter to reveal that Schoen had allegedly used his powers for evil by messaging Spelman out of the blue and making her feel uncomfortable in a series of messages.

Schoen recently reached out on Twitter for the first time after nine years of being connected on Facebook to say he admired Spelman’s work. “I had seriously NEVER spoken to him or heard him say anything until 10 days ago and I NEVER saw any of his activity on facebook,” Spelman told the Daily Dot. “The only thing I knew about him prior to all of this was that he was a podcast host and I was friends with him on Facebook. Nothing more.”

At first, she thought nothing of the random message.

the first time he ever spoke to me was 10 days ago when he sent me this tweet pic.twitter.com/hY14jDPV7m

“My first reaction when I saw he messaged me was like, ‘Oh, isn’t this funny. I first contacted him because I was a fan of his podcast and now he’s contacting me because he likes my Twitter!” Spelman said. “Because truly his first message was normal and nice, so I didn’t feel threatened at all.”

then he tweeted these at me and they both went unanswered pic.twitter.com/FIL0aPl1SK

Then he moved to Facebook. I politely told him I was seeing someone and then blocked him on FB & Twitter pic.twitter.com/k84dCJ3OrT

Put-off by these interactions, Spelman proceeded to block Schoen on both social platforms. But he made it clear he wasn’t going down quietly.

Here is where he started to get angry. He then tweeted these at me: pic.twitter.com/NJDop6VZ1E

Oops. Here they are pic.twitter.com/Az44EEfhED

The woman from the screengrab, Rhiannon Payne, told the Daily Dot that she is no longer involved with the production of Feminspire or with Schoen.

“Ben Schoen helped me launch the site in 2012 using his skills and expertise in digital media and built the site from a technical standpoint at a time when I had limited contacts in that space and not a lot of knowledge in regards to the online media landscape,” she said via email.

Payne then shared that she left the site and ended their relationship “due to the toll that the situation was taking on my mental health and I avoid communication with him.”

“When I stepped down I agreed to give him recommendations and guidance to help keep the site dedicated to its original mission, but those were ignored and I have since stopped trying,” Payne added. “I have not kept up with what he has been doing because frankly, the entire situation is a painful one.”

Abbey Lewis, a former senior editor at Feminspire, took to Twitter to further clarify the situation. 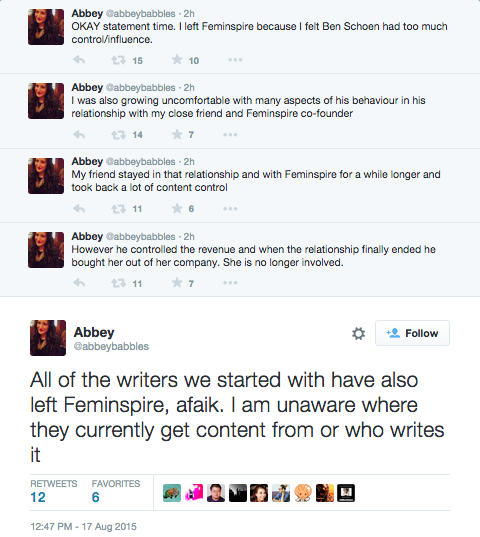 Andrew Sims, creator and host of MuggleCast, also made sure to set the record straight on his podcast’s relationship with Schoen. In an email to the Daily Dot, he called the incident with Spelman “really, really sad.”

He made it clear that although Schoen is best known for his work on MuggleCast, he hasn’t been a part of it for some time now: “I wanted to let you know that what I’m seeing about Ben today makes me feel sick to my stomach. He hasn’t been on the podcast for two years because of various issues I’ve had with him, and he won’t be on again.”

Sims even tweeted his support to Spelman.

@GraceSpelman I 100% stand with you. He hasn’t been on the show in two years for reasons and needless to say he won’t be on again.

Sims says that he and Schoen went their separate ways because of “business disagreements” unrelated to MuggleCast, but that he was “attacked on a personal level on numerous occasions” by Schoen and was forced to sever ties a few months back.

Laura Thompson, one of the hosts of MuggleCast, also weighed in. “I haven’t spoken with Ben in years,” she said. “We did not get along well when we worked together, which is why we no longer have personal or professional ties. He did on occasion make disparaging remarks about my appearance when we were teenagers.”

She added that she never witnessed behavior akin to the kind he displayed towards Spelman. “He never exhibited stalking behaviors towards me during the time we were in communication, or at any other time.”

Spelman, for her part, tweeted that she was sharing her story to protect younger women who may not be as wise to the subtext of Schoen’s messages.

Perhaps you feel some small pangs of sympathy for Schoen. Maybe he was really just trying to help Spelman. Allow this tweet to snap things into perspective:

However flippant this response might seem, it appears that he is in some ways taking this experience to heart. A few hours after Spelman’s tweets went up, he posted this distressing message:

But he continued tweeting.

The Daily Dot reached out to Schoen for comment. We will update this story with any response.

“I have done more for the cause of advancing women’s rights than any of the people who are criticizing me. This so-called crisis is manufactured by Ms. Spelman as a way to increase her profile as a social justice warrior. I grew up without a father and I spent years protecting my mother from scummy men and dealing with all of the difficulties that come with not having a male role model. Am I rough around the edges? Sure. Am I a predator? Absolutely not. If you read the email I sent Ms. Spelman it was not threatening and was filled with apologies. I even offered to connect her with people who could help her career. I had no interest in continuing contact with her afterwards since I was offended by the manner in which she ended our interaction. I represent no threat to her and her painting me into a villain and sending all of her sycophants after me is incredibly disappointing and immature. My attorney tells me I have a case already but I’m not going to go that route unless Ms. Spelman continues to attempt to unjustly tarnish my image.”

Photo via jtkays/Flickr (CC BY 2.0) | Remix by Fernando Alfonso III