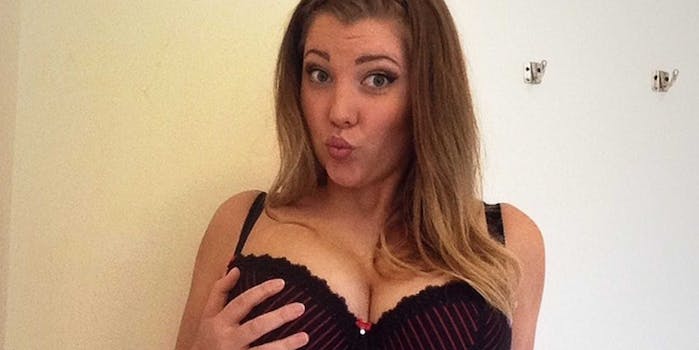 The #bellybuttonchallenge is asking women to prove how tiny their waists are. But Curvy Kate has a different take on the challenge.

First came the thigh gap. Then came the bikini bridge. Now social media has presented us with the “bellybutton challenge,” a viral craze encouraging women to achieve an unreasonable level of thinness. But the lingerie company Curvy Kate is looking to nip this dangerous thread in the bud.

The basic premise of the #bellybuttonchallenge is that if a woman is thin enough, she can reach her arm around her back and all the way around her waist to touch her bellybutton.

THIS IS HOW FAR I CAN GET IN THE BELLY BUTTON CHALLENGE I GUESS I AM FAT #bellybuttonchallenge #STOP pic.twitter.com/1mE32sTS5Y

But Curvy Kate, a plus-size lingerie brand targeted at women with D-cups and up, is fighting back. The company is encouraging women to post photos of themselves holding their boobs with the hashtag #BoobsOverBellybuttons.

“Well here at Curvy Kate HQ we think that [the bellybutton challenge] is a load of old tosh,” the company wrote on its blog:

“There are a heck of a lot more important things to be checking on your body than whether your arms are flexible enough to reach all the way around your own torso. So welcome the #BoobsOverBellyButtons movement! We want to encourage you guys to check your boobs and get to know what normal feels like…rather than doing these ridiculous body-shaming (and downright painful) demonstrations.”

The company shared photos of two of its models demonstrating the new challenge. @aroselikethis we heart you! And your boobs – look after them, get to know them and scrap the #bellybuttonchallenge Let's do #boobsoverbellybuttons instead! @coppafeelpeople

While #boobsoverbellybuttons is certainly preferable to the body-shaming #bellybuttonchallenge, it is worth noting that there’s a long tradition of corporations sexualizing women’s bodies to raise awareness of breast cancer.

Earlier this month, for instance, a “Hold A Coke With Your Boobs” challenge featuring women holding bottles of Coca-Cola with their breasts went viral. Although it was intended to raise money for breast cancer, both Coca-Cola and the Breast Cancer Research Foundation were quick to distance themselves from the challenge, with the latter organization saying it “trivialized” the disease.

That said, Curvy Kate is known for its body positive campaigns, which promote women of all shapes and sizes. Earlier this year, fthe company held a “Star in a Bra” online contest, in which Internet users could vote for the star of the next Curvy Kate plus-size lingerie campaign.

The winner of the contest was 21-year-old Sophia Adams, a police trainee who wears a size 32JJ bra. She won an exclusive photo shoot in Portugal.

“I just had to keep reminding myself that I’m doing this for all voluptuous women out there and that kept me going,” Adams told the Daily Dot.