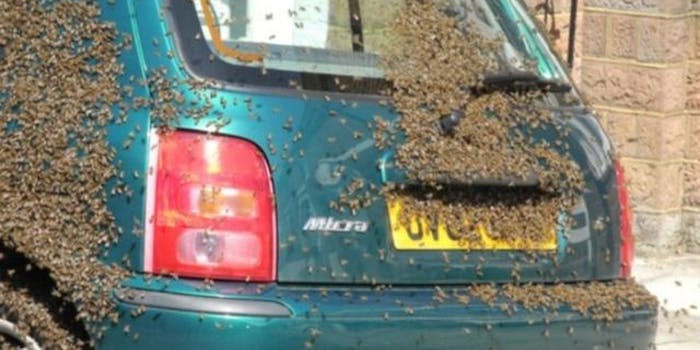 In the U.K., honeybees are infesting shops, schools, and this guy’s car

Is there insurance for that?

One poor student from Portsmouth in Britain had nightmares realised this week when a beehive turned his car’s wheel well into a new home.

George Heal, 21, had left his Nissan Micra parked securely just outside his house when his housemates noticed it had attracted some insectoid friends. Some 20,000 bees, led by a young queen in search of a residence, had admired the green automobile and set up a colony there.

Speaking to ITV, Edwards said, “It was a bit of a strange sight. The bees were pretty timid though—they weren’t really interested in anything but George’s car. Maybe they wanted a lift.

“Although none of us are allergic, we thought George probably would not want his car covered in a swarm of bees. He did figuratively have a bee in his bonnet though.”

Portsmouth City Council, with the assistance of local beekeeper Graham Cook, then removed the straying bees to a much safer new home. Cook said that, “This time of year is the height of the swarming season, where young queens leave their mother’s hive to find a place to raise their own colony.”