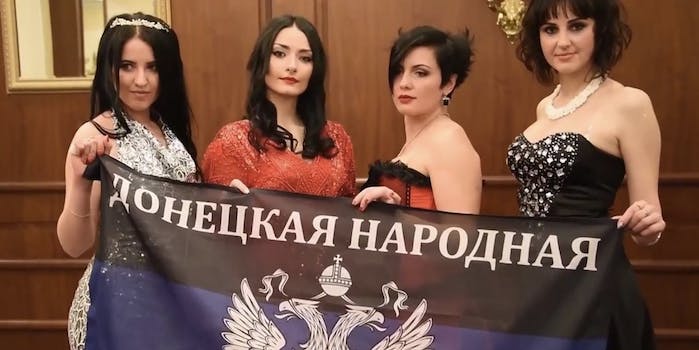 Russia isn't the only country with a history of making female soldiers parade around in swimsuits.

Female soldiers from the United Armed Forces of Novorossiya swapped out their combat fatigues for glittering ball gowns and a beauty pageant last Saturday in honor of International Women’s Day.

While International Women’s Day is usually regarded as a celebration of feminist achievements, in Donetsk, Ukraine it’s an excuse to dress up hardscrabble rebel combat forces in shiny outfits.

At a beauty pageant for female DNR fighters. "Where is Vostok?" Someone shouts out. pic.twitter.com/RXG8Mj5mJQ

Judge Yana Manuilova, a 35-year-old Donetsk soldier who worked as a lawyer before signing up to join the combat forces, told the Agence France Presse (AFP), “Even in my military fatigues I don’t forget that I am a woman. Besides, my comrades often remind me of the fact.”

The Deputy head of the self-proclaimed Donetsk People’s Republic, Denis Pushilin, bemoaned the toughness and commitment to military service usually displayed by the female fighters and wondered why they didn’t wear heels more often.

“Unfortunately, the stars of today’s holiday feel more at ease in uniform than in dresses and high heels,” Pushilin told AFP.

The Donetsk People’s Republic, which claimed the Crimean Peninsula in May 2014, had previously been declared a terrorist organization by Ukraine authorities, who banned the rebel group in 2007. Along with the Lugansk People’s republic, the two groups combine forces and militias to form the self-proclaimed Federal State of Novorossiya (New Russia).

Plenty of women signed up to fight for the pro-Russian cause. But if Ukraine’s occupying force parading its women soldiers around like high-class sex workers seems bizarre, it’s actually par for the course.

Before the 2014 takeover, there was already an annual beauty pageant for female soldiers in the Armed Forces of Ukraine. Selected from the 18,000 female soldiers in Ukraine, the contestants were judged not only on their tank-maneuvering and rifle marksmanship, but also by their ability to rock a set of false eyelashes while posing in combat fatigues.

Russia’s female soldiers aren’t alone in being objectified to drum up titillation and/or support for the cause. Women in the police ranks of Yakutia and Belarus have been subjected to pageants and even sexy calendars.

In some countries, there just aren’t enough women in the military to objectify on the basis of their gender. So what’s a militarized state to do?

Ugandan authorities solved this problem in November 2014 by simply allowing the military to commandeer the Miss Uganda contest, which transformed the traditional swimsuit segment into a paean to African agriculture. Instead of donning bikinis, the contestants now have to milk cows and drive tractors.

And when soldiers and police aren’t competing for crowns, the inmates of women’s prisons around the world fight for titles like Miss Gulag (Siberia), Miss Penitentiary (Brazil), and Miss Captivity (Lithuania). Not only are prisoner beauty pageants popular outside the US, in many countries they are broadcast on national television. While some pageants consist of inmates forced to take part, others use prizes ranging from $160 to over $1000 as incentive.

The United States wouldn’t be a world leader without its own take on the law enforcement/military beauty pageant trend. Here at home we have Ms. Veteran America, a contest that affords hefty scholarships and category titles like “Social Butterfly” and “Hot Momma of the Year.”

But neither military beauty contests nor prison pageants hold the title of “Most Troubling.” That claim belongs to the Miss Holocaust Survivor Pageant, held each year in Haifa, Israel.