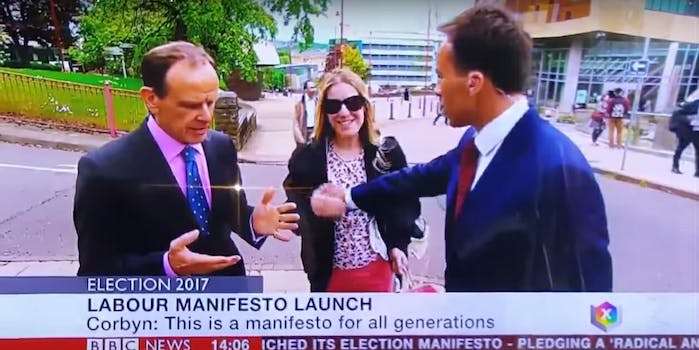 He says the act was 'unintentional'—but up to what part?

A BBC News journalist is under fire after he groped a woman on air, an act he now calls unintentional.

Reporter Ben Brown was conducting an interview in Bradford, England, when a young woman walked into frame. Brown, in an attempt to move her out of view, placed his hand on the young woman—right on her breast. His hand remained there for approximately two seconds as he pushed her away, without acknowledging where he had touched her. The woman then slapped Brown’s arm and walked away.

Brown later turned to Twitter, calling the grope “completely unintentional” as a response to an “unfortunate interruption” while live on air.

But the internet has mixed opinions on Brown’s behavior. Some found it “hard to justify,” while others said critics were overreacting. Some even criticized her for “assaulting” the reporter.

you'll find it hard to justify physically moving someone away, let alone by grabbing an intimate area. pic.twitter.com/lCI9JQ7zAF

For argument’s sake, let’s give Brown the benefit of the doubt and say his initial reaction was unintentional. If stopping her from entering the frame was his only intention, he could have gently used his arm, not his hand. He could have also reached for her arm, not her breast. Then once he made contact with her breast and Brown knew well enough that he’d made contact because he was looking directly at her, the sensible reaction, if unintentional, would be to be a flat palm and a “whoops!” not to cup her breast, move his hand around, and keep it there for several seconds. Regardless of gender or sexuality, a person knows what a breast feels like. You know when you’ve encountered one, and you know that if weren’t given permission to touch one, then you back up and apologize.

word of advice one word 5 letters starts with S ends with orry.