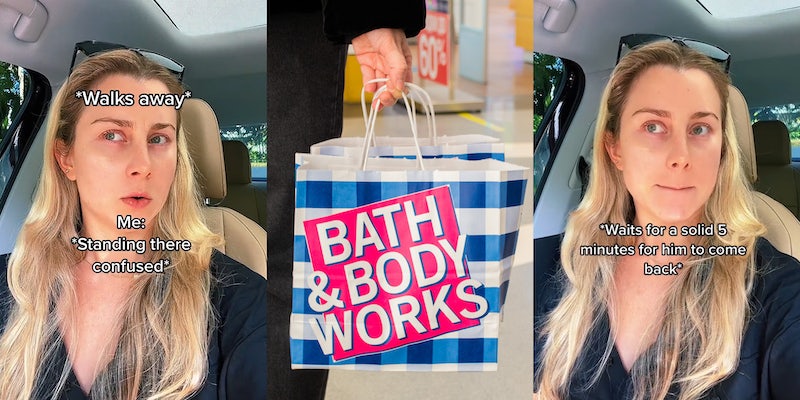 'Came for the candles, stayed for the verbal abuse!!!'

Bath & Body Works left one candle-shopper stunned after a cashier allegedly yelled at her, TikTok user Katie (@kayfey) revealed in a viral video on the platform.

In the clip, which amassed over 440,000 views, Katie reenacts her experience with a cashier which, from her interpretation, definitely got a little heated.

“Here’s a very quick reenactment of the experience that I just had at Bath & Body Works,” Katie explains as she role-plays an encounter in which, after sulkily disagreeing with the TikToker about their phone number, the cashier allegedly raises her voice. Katie claims the worker shouted that the customer “didn’t qualify” for a specific membership discount by a few cents for tax reasons.

For many users in the comment section, this employee purportedly raising their voice was a clear overreaction. “I swear, it’s being treated like this that made me develop social anxiety,” one commenter wrote. “It’s not you. It’s a number of things, but it’s not you,” a second added. A third commenter claimed, “It’s like being punished for Karens.”

However, several other users took a more balanced approach, with one commenter saying, “I’m not condoning behavior whatsoever but customers have become royal pains, too. I see it on both sides.” A second added, “Everyone is tired and overworked. Not an excuse but it’s everywhere.”

The TikToker, who in the video’s description joked about being “verbally abused” by the cashier, then made several follow-up videos responding to more critical comments in the original video. In response to one comment, who said “your lack of retail experience is showing,” the user said sarcastically, “I’m actually 29 years old, but never had a job because Daddy funds my life for me.”

She then responded to a second commenter who said the employee was “correct” for not giving her a discount by saying, “It’s not about the coupon! The problem was that this guy [the employee] was a dick from the start.”

In another TikTok, she joked, “Men used to go to war and now they fight in the comments of people’s TikTok videos.”

The TikToker and Bath & Body Works’ Communications team didn’t immediately respond to the Daily Dot’s request for comment via email.