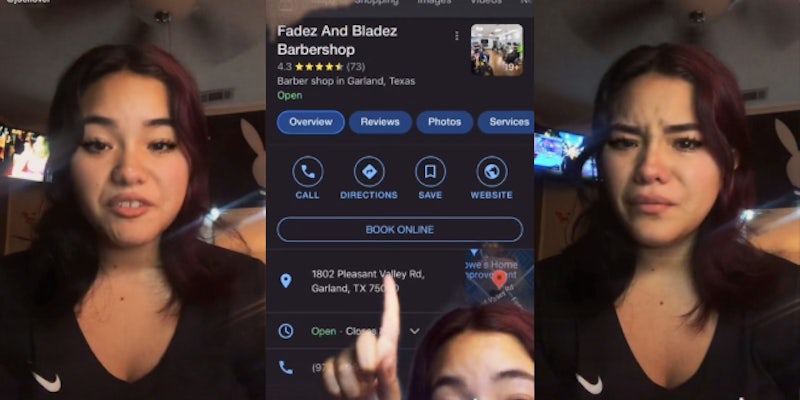 ‘I need justice’: Woman says she was raped by barbershop owner

In a series of TikToks, a woman says she was raped by a man who works at a Texas barbershop. After the TikToker’s story went viral and spurred negative reviews of the barbershop, she said that her case will be going to trial.

Alice Gomez (@jocilover) posted a TikTok on Aug. 24 saying that she had been raped by a man who owns a barbershop near Gomez’s retail job.

“Since court couldn’t do nothing about it, I’m gonna tell all of y’all. Because I need justice,” Gomez says in the first in a series of TikToks about the alleged assault. “On May 4, 2022, I got raped.”

On Tuesday, Gomez’s video had almost 2.5 million views. Other videos that Gomez posted about the alleged assault have also gone viral.

Gomez says that the man goes by Chuy and works at Fadez and Bladez in Garland, Texas. She says that the two met after Gomez posted online about open positions at her retail job and planned to go out on a date. In a series of TikToks, Gomez tells her story:

After some rescheduling, they met on May 4. Gomez says that Chuy showed her his gun and later invited her to sit in the backseat of his truck with him. She did, and Gomez says the pair began kissing. Gomez then says Chuy began to pressure her to have sex with him. Gomez says Chuy then pulled her legs so she was laying down and touched her genitalia while she told him to stop. She says that Chuy then “pulled [her] underwear to the side” and raped her.

“I was frozen,” Gomez says in one of her TikToks. “I just kept saying ‘no, stop, please.’ And he kept going.” Gomez also says Chuy put on a condom and continued to rape her.

Gomez says Chuy asked her why she was upset and took her back to her car. She then says Chuy said that he was sorry, but that “[he] couldn’t “help it, [Gomez is] too beautiful” and asked her to not tell anyone about what had happened.

Gomez says once she was alone, she told a friend and her family that she had been raped.

“My parents were furious. ‘Why didn’t you do anything? Why didn’t you stand up for yourself?'” Gomez says in a TikTok, explaining that she “couldn’t” speak up in response. Her family then called an ambulance, and Gomez says she went to the hospital, was swabbed for DNA evidence, and spoke with police.

Gomez says that she sent screenshots of the messages between her and Chuy to a detective involved in her case and that Chuy messaged her many times apologizing. She also says that police located the condom Chuy used when raping her and arrested him. Gomez says he posted bail, and it was revealed that his legal name is Jesus.

Gomez says that after months went by, she saw Chuy working at Fadez and Bladez and that she got a call from Dallas County told her “they could not do anything to help [her] because [she] didn’t have enough evidence.” Gomez said because a potential jury did not accept her case, she was denied a trial.

“I felt hopeless that court, detectives, anyone … could not help me,” Gomez says. “That’s why I’m telling TikTok. I need justice.”

Throughout her TikToks, Gomez expresses that she felt a lot of guilt about being assaulted. She says she feels guilt that she didn’t fight back, worry that she’d ruin Chuy’s life if she reported the rape, and guilt that she’d kissed him in the first place.

In a series of TikToks posted on Aug. 27—shortly after Gomez posted videos detailing the assault and aftermath—Gomez says that one woman told her she was harassed by Chuy, and another said he attempted to assault her.

“I am not the only victim,” Gomez says. In other TikToks, she shows screenshots of messages with other women who say they have been sexually assaulted by Chuy and a man who says his girlfriend had adverse experiences with Chuy.

In a TikTok posted on Aug. 29, Gomez says that the detective she had worked with informed her that her case has now been accepted. In an Instagram direct message to the Daily Dot, she said that she hasn’t yet met with a district attorney about the case. She also said that she feels TikTok played a big part in her case being finally accepted.

The Yelp page for the barbershop that Chuy works at, Fadez and Bladez, is not currently under review by Yelp because it has “recently received increased public attention,” according to a Yelp notice on the business’ page, “which often means people come to this page to post their views on the news rather than actual consumer experiences with the business.” The page currently has nearly a dozen 1-star reviews, all of which reference Gomez’s statements.

“This place is ass don’t come here to get ur haircut the owner is a rapist and sexually assaults girls,” reviewer Katherine S. wrote. “Justice for Alice and all the other girls who’ve encountered with him.”

“Owner is a RAPIST!!” reviewer Keslie K. wrote. “Saw a poor girl on TikTok give her story about how the owner Jesus raped her.”

As Gomez waits to hear more about the next steps in her case, viewers have been following along with her videos and commenting support and, at times, conflicting advice.

“Share this and everything you can online,” @sandyp8ants commented on Gomez’s most recent video. “The police or the court system won’t do anything!!”

“I hope you get the justice u deserve,” @paulinadeporos559 commented. “And if the system fails you, just know u speaking up helped others.”

The Daily Dot was not able to reach Fadez and Bladez. The Daily Dot contacted the Garland and Dallas police departments via email.