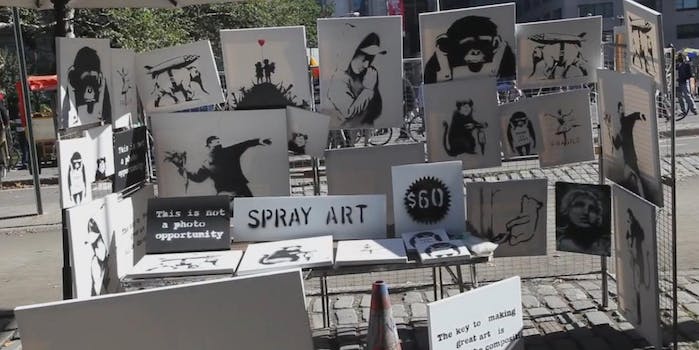 You missed out on buying an original Banksy for $60

Banksy's monthlong residence in New York took a commercial turn over the weekend.

Banksy is halfway through his one-month residency in New York, with a new work of street art appearing each day. So far we’ve seen a truck full of stuffed animals drive through the Meatpacking District (Sirens of the Lambs) and various spraypainted murals show up across the city. However, Sunday’s contribution may be the most interesting yet.

In a video posted to his website on Sunday night, Banksy revealed that he (or at least an associate), had been selling original artwork from a street stall all day. In other words, anyone in Central Park could have just strolled past and bought a painting by one of the most famous living artists in the world.

The only catch was that nobody knew the work was actually his.

Marked at $60, the paintings were on sale for a fraction of the price of a “real” Banksy. But thanks to the ubiquitous nature of Banksy-lookalike street art, the real deal just wasn’t selling very well.

It took four hours for the first sale to be made, and even then, the customer negotiated her two paintings down to half price. As for all the people who passed the stall without buying anything, let’s hope they never find out what they missed.

Perhaps Banksy is making a comment on the meaninglessness of his own brand. After all, how quickly would those paintings have been snapped up if the stall had been labelled? Then again, maybe he’s just trolling.

Either way, several people have just bought paintings that could potentially sell for hundreds of thousands of dollars—and they probably don’t even know it yet.

And for those hoping to rectify their terrible mistake walking by: “Please note: This was a one off. The stall will not be there again today.”