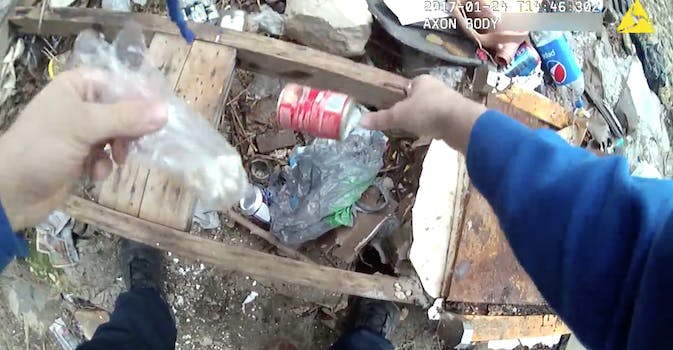 The video reveals the ways police can manipulate their use of body cameras.

Baltimore authorities have accused a city police officer of evidence tampering after the activity was captured on the officer’s body camera, likely by accident.

The officer, who has not been named, is seen on bodycam video obtained by local news outlet WBFF placing a bag of what is believed to be drugs in an empty soda can. The officer then walks out of the alleyway, says, “I’m gonna go check here,” as he walks back to the same spot and pulls the baggie from the can.

Footage shows officer placing drugs in trash; goes out to street, turns on camera, returns. Cams save 30 sec prior to activation, w/o sound pic.twitter.com/5ZW128lWFM

Footage of the officer placing the evidence in the can was captured thanks to a feature in body cameras that records footage, without sound, for 30 seconds before a user activates the recording function. The fact that there is no audio until after the officer is out of the alley bolsters this theory.

A baggie of drugs was later used as evidence to charge a suspect arrested during this particular police action. The charges were dropped after the Baltimore public defender’s office discovered the body-camera footage, WBFF reports. The suspect was in jail since January, unable to pay a $50,000 bail. Prosecutors reportedly offered the suspect a plea deal before the case was dropped.

A spokesperson for the Baltimore State’s Attorney’s Office told the Baltimore Sun that prosecutors on the case “took immediate and appropriate actions by dropping the case and alerting his supervisor.”

As the Sun notes, it is still unclear whether the officer was planting drugs or simply recreating his discovery of evidence. Regardless, the episode serves as an example of how police can manipulate their use of body cameras to serve their ends.

In a statement, the Baltimore Police Department said it has launched an internal investigation.

“We take allegations like this very seriously and that’s why we launched an internal investigation into the accusations,” the department said. “We are fortunate to have Body Worn Cameras which provide a perspective of the events as reported.”