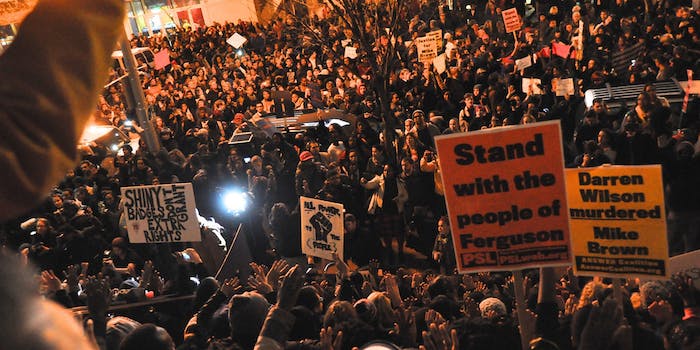 The people who have protested in Ferguson, Cleveland, New York, and Baltimore have made it clear that they’re angry about racial disparities in police practices. But a new Wall Street Journal–NBC News poll contains striking evidence of racial disparities in something as fundamental as how people perceive those very protests.

On the other hand, white people believe by almost the same clear majority (58 percent) that protests and riots simply represent “people seeking an excuse to engage in looting and violence.” Only 27 percent of African-Americans share that view. The poll follows widespread protests that sparked riots in some areas following the death of Freddie Gray while in the custody of the Baltimore Police Department. On Friday, Marilyn Mosby, the state’s attorney for Baltimore, announced homicide charges against six officers for Gray’s death.

Among the poll’s other key findings, according to the WSJ story: “A resounding 96 percent of adults surveyed said it was likely there would be additional racial disturbances this summer.”

Photo via Neil Cooler/Flickr (CC BY 2.0)