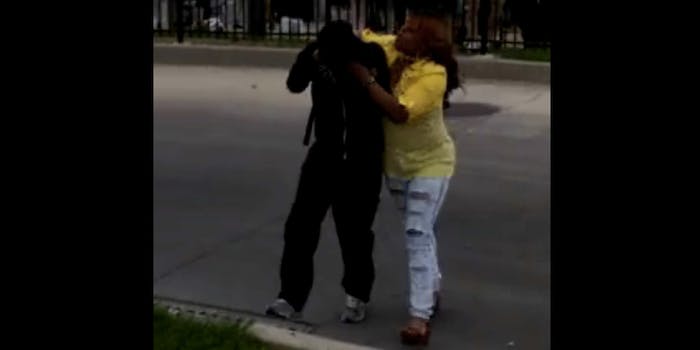 The only person more feared than the police.

Tensions continued to flare in Baltimore Monday evening as police clashed with protesters who took to the streets in the wake of Freddie Gray’s funeral. Gray was a 25-year-old black man who died in police custody under unclear circumstances, and people around the city—notably, many teens—gathered in protest.

While some young people were throwing rocks and bricks and bottles at police officers, a video of one young man shows that even if law enforcement couldn’t stop him, his mother certainly would.

The video was originally from WMAR, the Baltimore ABC affiliate. It’s just a brief shot of them in the background.

Another clip confirms that the woman seen physically confronting the young man is most likely his mother, if not a close relative. You can hear her cursing at him and saying “You gonna be out here doing this nonsense? Get the fuck over here.”

Baltimore Mayor Stephanie Rawlings-Blake announced in a news conference late Monday that a 10pm to 5am curfew would be enforced Monday night into Tuesday morning.