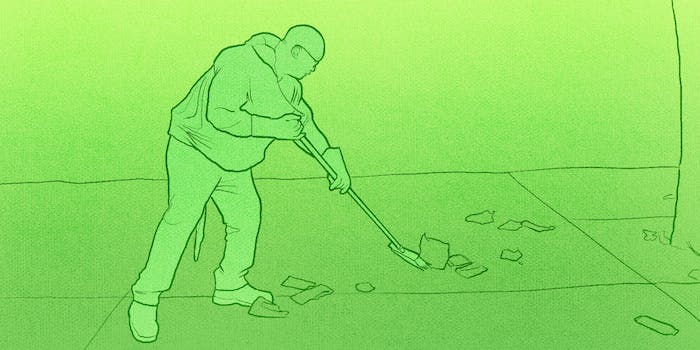 Baltimore residents emerge to clean up a city trashed by violence

The city of Baltimore descended into violence Monday night as mass protests sparked by the death of Freddie Gray—an African-American man who died in police custody—turned chaotic.

By late Monday, the same day as Gray’s funeral, stores had been looted, over 200 people had been arrested, police cars had been set aflame, and over a dozen police officers had been injured. Civil rights groups tried to calm the rage of Baltimore residents, while Maryland Gov. Larry Hogan (R) declared a state of emergency.

Early Tuesday morning, however, a large group of Baltimore residents sought to counter the narrative of violence by volunteering to clean up the damage.

We are already seeing volunteers from across Baltimore joining together to clean up damage.

Many people came out on their own, but there is also a large coordinated campaign to clean up the city. One Facebook event urged residents to come out on Tuesday morning with cleaning supplies like “heavy duty trash bags, gloves, brooms, dust pans, trash cans, containers, and anything else that would help.”

Over 2,200 people have signed up to be a part of that event, and it’s not the only one. Posts on the page list other efforts by churches and community groups to get people together and repair the damage.

Community members have created an online form where people can request cleanup assistance from participating volunteers.

One commenter on the Facebook page urged people interested in cleaning up to first talk to property owners and residents.

“It is possible that what people need is taking photos of destruction for insurance claims, filling out insurance claims or bringing medicine to those whose CVS was destroyed,” wrote one Baltimore resident. “Everyone’s heart is in the right place, but please do not assume that you know what is helping. Always ask.”

This is what it looks like in Baltimore right now as residents emerge to pick up the pieces.

Rioters wreaked havoc in Baltimore last night – but this morning, volunteers are rallying together to clean up damage pic.twitter.com/qIxBVwvH8R

omg they're so violent RT @_hmmarr: Dozens of volunteers out in force to clean up #Baltimore this morning. pic.twitter.com/GDhdP5utuz

Local sweeps the front while looters push carts out off the side. pic.twitter.com/GCkQVztdHb

#Baltimore residents on the streets w/ brooms this AM to clean up after Monday's riots. http://t.co/O3DjktGyg6 pic.twitter.com/TzXWEtxRNY

This morning Baltimore youth cleaning up their neighborhoods. pic.twitter.com/b36gJS5WZD

#Baltimore RT @jemillerwbal: Volunteers arrive in West Balto to clean up damage from riots…"This is our city" pic.twitter.com/hesr9X3G8b

Chaos and curfews in Baltimore. As the criminals loot and set fires, people like Jason Butler show up to clean up. pic.twitter.com/pMAPW9zwao

Some citizens got up early to clean the trash left behind by yesterday's riot in Baltimore. http://t.co/6y0cLnXICi pic.twitter.com/nQTXy8J9im

Jeanetta Riddick in pink out here cleaning up. She worked at the CVS that burned. "What are we left with?" pic.twitter.com/lOUWbVVOTK

After spasms of violence and fire, Baltimore citizens clean their streets. via @baltimoresun http://t.co/7QRVox6SAz pic.twitter.com/aQ9hb1CDtx

This is where the focus is today. Clean up. #Baltimore #FreddieGray pic.twitter.com/kLLMqjnqNZ

Clean up efforts underway at CVS intersection in Baltimore this morning. pic.twitter.com/lCgQNkjbuR