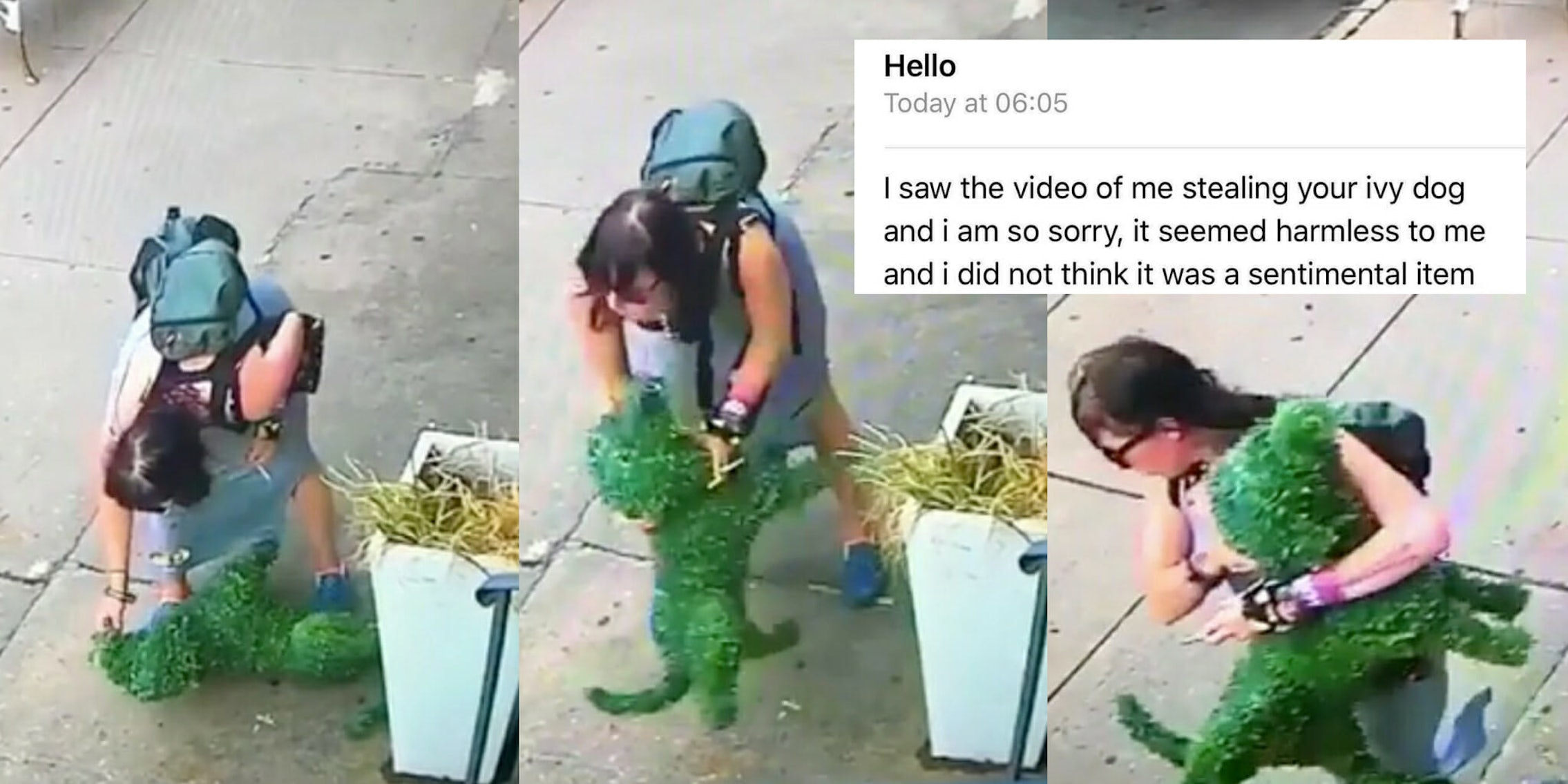 Even shoplifters with the stickiest of fingers know that if you’re going to steal, it shouldn’t be from a locally-owned company. They also know that if you get caught, you’re better off admitting to the theft than making things worse. But it seems that one Brooklyn woman forgot to look up these lifting tips before she decided to drunkenly steal a topiary dog from a local bakery, then got upset when the bakery owner actually cared about the bush the woman had ran off with.

On Aug. 18, Kim Vann, the owner of Prospect Heights’ the Bakery on Bergen, shared security camera footage to the bakery’s Instagram account of a white woman sitting outside her establishment, nonchalantly smoking a cigarette, before she boldly kicked over a bush in the shape of a dog lifting its leg to pee, picked it up, and walked out of frame with the dog. In another video in the same post, the same woman was seen sitting on a bench with a man while the two chatted outside the bakery.

In the body of the post, Vann, who is Black and Asian, wrote that her bakery had just undergone a renovation thanks to a major television show, and that the dog the woman had stolen was one of three topiary figures that were part of the makeover. The dogs, named Babatunde Dayquan, Peabody, and Ivy, were some of her favorite additions, and the woman stole Peabody.

“As a native Brooklynite I’m trying to build my business in a community where I grew up and someone had the nerve to violate my shop like this,” Vann wrote. “Please let me know if any of you recognize these people that have absolutely no respect for me, my business, my community and my Brooklyn.”

Wanted: Dog Thief. Swipe left. As many of you know I was blessed with a makeover by a major television show. I love what they did with my shop. One of my favorite pieces are my fake dogs that we bring in every night. There were 3 dogs Babatunde Dayquan, Peabody, and Ivy. Today this girl stole Peabody. As a native Brooklynite I’m trying to build my business in a community where I grew up and someone had the nerve to violate my shop like this. Please let me know if any of you recognize these people that have absolutely no respect for me, my business, my community and my Brooklyn.PLEASE share.

The video of the topiary thief gained traction around other Brooklyn social media accounts, such as OurBKSocial, and the Instagram account of Vann’s friend, radio host Angel Yee.

Two days after Vann first posted the video, the woman who stole Peabody directly messaged both Vann and Yee, saying she saw the video of herself “stupidly stealing your ivy dog,” and that she felt “horrible” and wanted to giver Vann the dog back and make it up to her. She told Yee that she didn’t know the object was sentimental and thought the theft would be harmless, as if she thought it would OK to take a bakery’s patio furniture even if they weren’t emotionally attached.

“I cannot apologize enough and hope I can make it up to you. I hope you can find it in your heart to forgive me, I did not think I was hurting anyone and I realize it was a dumb drunk thing to do,” the woman wrote to Vann, clearly not realizing that taking anything that does not belong to you directly affects whoever the stolen object belongs to.

Update: So the girl who stole my decorative dog contacted me and my sis @angelayee. She also started following my bakery. I’m letting the police handle this situation. Thank you to everyone who has supported me because any intelligent person realizes it about much more than the actual value of the dog or that it’s not a real dog.

Update on the earlier video of the stolen dog post *** and for anyone who thinks that stealing is ok and you should just let it go, hopefully when someone steals anything from you you still feel that way. Earlier this year a customer stole the tip jar from our juice bar, and while it wasn’t more than a few dollars it was the principle that matters. As a small business owner, and as a human being, every dollar you put into your business and every small decoration means a lot.

The theft didn’t hit Vann too hard, hopefully, seeing as she was able turn around the community support into a “Dog Gone” party to thank everyone.

And while Peabody was returned before Aug. 21, it wasn’t without adding insult to injury. Not only did the woman not directly apologize to Vann, but she sent someone in her place to do the deed of returning Peabody to its rightful owner. Just look at that man with his jacket hood pulled up around his face, his head pointed down with a ball cap lid covering his face, as if returning to the scene of the crime is too much for him to take.

“The only reason a half hearted sarcastic apology was even offered and or given is because she was caught on camera,” Vann wrote. “The Gothamist interviewed me yesterday and was informed that the authorities were notified but still took it upon themselves to give the culprit a heads up & orchestrated the return of my property that is only suitable enough for the trash man at this point.”

Good evening. Thank you to those that have supported me and understood that what happened to my business was and is not ok. To those that have made light of what has occurred, shame on you and perhaps you don’t know how hard it is for a small business owner. That’s ok too. However, not everyone that steals is allowed to apologize & returned stolen property after it has been vandalized like they have. The man that is seen covered up like a bank robber I think actually lives on the block that houses my establishment and that is where I believe my property has been since Saturday. It was stolen for shits and giggles but no one connected to me has found this act of foolishness funny in the least bit. The only reason a half hearted sarcastic apology was even offered and or given is because she was caught on camera. The Gothamist interviewed me yesterday and was informed that the authorities were notified but still took it upon themselves to give the culprit a heads up & orchestrated the return of my property that is only suitable enough for the trash man at this point. I am thoroughly disgusted and to those that have outwardly supported this act, you should all be ashamed of yourselves and I would only hope that no one steals anything from you. I still believe that there are more decent people than the ones that sided with the thieves.

Gothamist, which covered the theft of Vann’s topiary dog, reported that Vann filed a police report and allowed the cops to take it from there, though it appears the thief returned the dog before the police were completely involved. The woman who stole the dog, despite being the entire reason that Vann was rightfully pissed about the theft in the first place, seemed pretty bitter about the situation herself, basically telling Gothamist that she hopes Vann’s happy that she drummed up publicity for her establishment.

“The dog has been returned and it seems the bakery has gotten some much needed publicity from it and all is back where its supposed to be. I meant no ill will and unless the owner wants to reach out to me personally thats all I have to say,” she said, as if she’s the one who’s justified in having ill will over the situation.

“I reached out to the owner to make it right almost immediately and instead of responding made a marketing campaign out of it. Good for her,” she concluded. “I wish the bakery all the success apologize for my actions and hope we can all move on from this.”

What a weirdly entitled way to feel about apologizing for stealing someone’s patio furniture, as if you believe you should be forgiven just because you came forward after having your image blasted across social media. At least Vann has her Peabody back and seems to be in lighter spirits about the theft, sharing “Steal Peabody Challenge” videos to Instagram. Because what else are you going to do?

My friends think they are so funny. I gagged. Come by tomorrow and do your best reenactment. #lemonstolemonade #caught #thestealpeabodychallenge