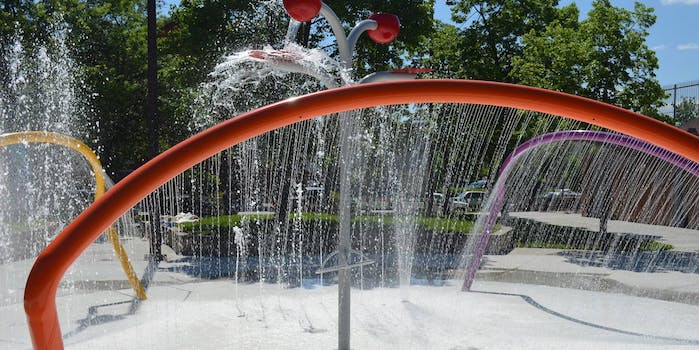 Babysitter under investigation after video of a baby goes viral

The seven-month-old was left under buckets of dumping water.

When Desiree Howell saw a seven-month-old baby screaming at the splash pad in Greenwood, Indiana, she was concerned. The child’s babysitter was sitting her under large buckets of water and letting them dump on her head. After this happened several times, Howell called the police and took a video, which she then posted to Facebook in hopes of reaching the baby’s mother to let her know what had happened.

In the comments section of the video, Howell also adds:

She was making the baby walk barefoot. Mind you she is 7 months old and can’t walk yet. She had no shoes on. The ground was hot for me to even walk on BC I tested it. She did it many MANY MANY times to this baby. Then she did the new swing where the baby can swing with you and the lady was going so freaking high to where the baby was being jerked and crying her eyes out. Then she would sit the baby by the water that sprays out the ground and the water was in her face. The little girl was balling her eyes out and trying to turn from the water. I’m still livid.

Since being posted on Facebook on June 15, the video has over 800,000 views. The child’s mother, Brittany Dixson, saw the video that same day, picked up her child from the sitter, and fired her on the spot. Dixson told the IndyStar, “I know it was poor judgment and not cruel intention.”

The child was checked out at the local hospital and, according to Dixson, is doing fine.

The babysitter is currently being investigated by Indiana Department of Child Services. No charges have been filed.