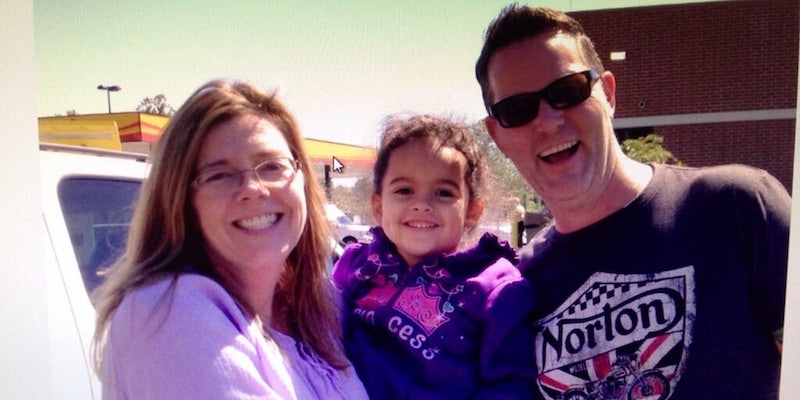 Baby Veronica already has more Facebook supporters and more trending tweets than most Americans get in a lifetime—and she's only 4.

Baby Veronica Brown already has more miles under her belt, more Facebook supporters, and more locally trending tweets than most Americans get in a lifetime—and she’s only 4.

It’s unfortunate that she got it by being ping-ponged across the nation in a bitter custody battle between Dustin Brown, her birth father, and Matt and Melanie Capobianco, her adoptive parents.

Because Veronica is 1.2 percent Cherokee through her father’s bloodlines, the case also involves the Cherokee Nation, who have come out swinging on behalf of Brown. The case has been tried in Oklahoma and South Carolina, and last week, the Supreme Court came to a decision—to send Veronica back to South Carolina and her adoptive family, whom she has not seen in a year and a half.

Brown and the Cherokee Nation have taken to social media in an attempt to tell their side of the story. The hashtag #BabyVeronica, with 6,872 tweets, peaked on September 23, the day of the (latest) handover. The Facebook page Standing Our Ground for Veronica Brown has 12,854 Likes so far, and features frequent updates on the case. Facebook is an important connector in American Indian communities, and it appears that at least on social media the adoptive parents are severely outmatched, despite a court victory.

Even for the normally fraught battlefield of family court, the case has been bitter on both sides.

Brown, who serves in the Army, and Christy Maldonado, Veronica’s birth mother, were engaged and expecting a baby prior to Brown’s deployment to Iraq. Four months before the wedding, Brown got a text calling everything off. Then, according to the Keep Veronica Home website, Maldonado began texting Brown daily, asking him to sign over his parental rights to her. “I knew I didn’t have a chance to fight her for custody because I was about to leave for Iraq for a year. So after weeks of texts, I said I would sign my rights over, thinking I was agreeing for her to have full custody and she would let me see my daughter.” Instead, Maldonado made arrangements to have the baby adopted by the Capobiancos. She insists that she gave him a choice to either pay child support or sign over his rights, and he chose the latter.

After his return from overseas, and with the help of legal support from the Cherokee Nation under the Indian Child Rights act (which was created to keep First Nations children within the culture of their origin), he sought full custody of his daughter and temporarily obtained it in September of 2011 thanks to a court ruling in South Carolina. The Capobiancos continued to appeal the case to higher courts.

Veronica was 27 months old when she met her father. She was 4 years old when the Supreme Court decided that the Indian Child Rights Act did not apply to her, and gave her back to the Capobiancos. While the ruling happened this summer (and the adoption was not finalized until July 17), Brown refused to hand her over, and was arrested.

On September 4, Oklahoma Governor Mary Fallin signed the extradition warrant, sending Brown to South Carolina to face charges of custodial interference. Last Monday, Veronica was returned to the Capobiancos, who are now suing Brown and the Cherokee Nation to recoup the costs of the court battle.

This child has been living in a healthy, loving and nurturing home with her father and stepmother for more than a year and a half. She is surrounded by a loving extended family, which includes her grandparents, sister and cousins. Dusten has always been found to be a fit and loving father, yet the South Carolina Supreme Court considered none of these factors, including the father/daughter bond they have developed over the last 19 months.