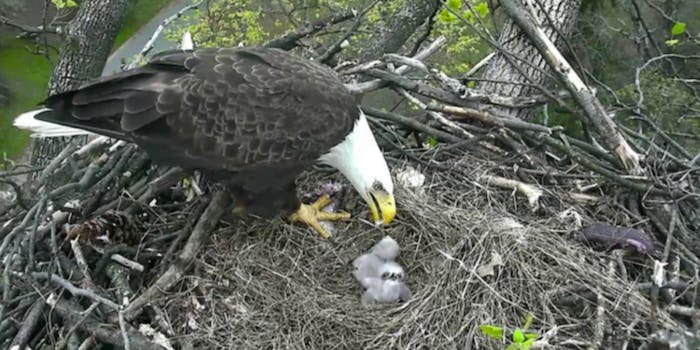 The bald eagle nest cam has truly united the Internet

A second baby has hatched, and people are riveted.

Have you been watching the bald eagle nest cam at Washington D.C.’s National Arboretum all week as a distraction from the horrors of our world? You’re not alone.

The Internet has been riveted by the impending birth of the babies of two American bald eagles, Mr. President and the First Lady. The first eaglet was born on March 18, as thousands tuned in to watch a little grey puffball hatch after nail-biting anticipation.

On Sunday morning around 3am ET, the second eaglet hatched earlier than expected, ushering in the first day of spring.

People (and some animals) are very invested in the lives of these eagles and their babies. It’s truly brought us together in a collective effort to watch life thrive as the world crumbles around us.

Not too worried about eaglet #2 not getting a lot of food yet. Mama/Papa seem to know what they're doing! #goodparents #dceaglecam

Gah! Look at these two!

As of noon CT, the eaglets were getting some grub from mama.